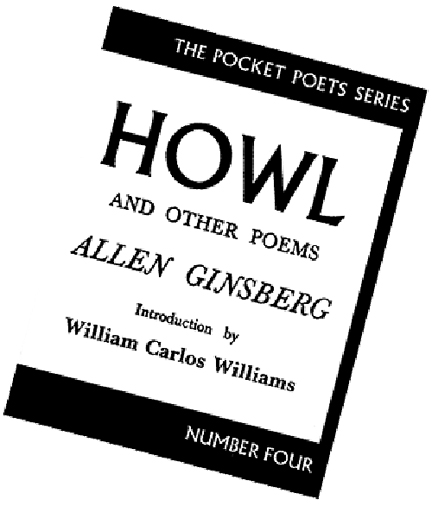 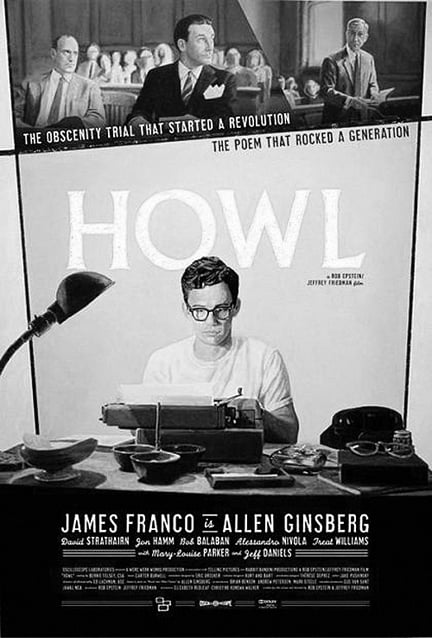 "I saw the best minds of my generation destroyed by madness, starving hysterical naked..."

Regarding the fact that the last week of September each year is Banned Books Week, it should be of interest some of the more famous cases of books that have been banned. One in particular, in which there was a trial that made headlines nationwide, has to do with an (at the time) unknown poet, and a conclusion that is truly ironic. It's about Alan Ginsberg and the publication of his poem "Howl."

In October of 1955, Ginsberg and five other poets; Gary Snider, Philip Lamantia, Philip Whalen, Michael McClure, and Kenneth Rexroth, held a poetry reading at the Six Gallery in San Francisco. This was the first time that Ginsberg ever publicly unveiled his poem "Howl," which in the time since has been recognized as one of the greatest and most influential poems of the 20th century, and as the seminal poem of the Beat Generation. As such, this particular poetry reading went down in history.

After the publication of the poem by fellow Beat Poet Lawrence Ferlinghetti at City Lights Books, the poem increased in popularity for its raw imagery, openly sexual content, and pronouncements of a cultural revolution. But in March of 1957, 520 copies of the poem were seized and Ferlinghetti was arrested on obscenity charges.

The trial caught headlines across the country, which included articles in both Time and Life magazines. Hearing the case was Judge Clayton Horn, who was a known conservative judge, which made for even greater tension in which direction the verdict would fall. Ferlinghetti was supported by the American Civil Liberties Union (ACLU) and was defended by Jake Ehrlich, who was famous for defending celebrities in a number of separate cases.

As witnesses, both the defense and the prosecution brought forth a total of nine literary experts to testify as to whether or not "Howl" had any literary merit. Ultimately, the book was found to be not obscene by Judge Horn.

The great irony of this case, as well as any number of cases where books are attempted to be banned, is that the trial with all of its nationwide news coverage made the poem a cultural phenomenon that it arguably never would have been were it not for the opposition's outrage as to its content. Inadvertently, those who put the book to the scrutiny of the law in an attempt to silence Ginsberg and Ferlinghetti instead made them national celebrities, creating audiences for the poem and subsequent works of theirs that they would not have dreamed of having otherwise. Even during the trial, when asked if "Howl" would survive the test of time as a piece of literature, San Francisco Chronicle literary critic Luther Nichols responded that there is no real way of knowing, but that the trial itself would expand the poem's popularity.

The trial, as well as the publication of Jack Kerouac's "On The Road" (also published in 1957; Ginsberg actually dedicated "Howl" to Kerouac, as they were lifelong friends) were the beginning of the nationwide recognition of the Beat Generation. Though acknowledged in various periodicals prior to this time, by the end of 1957 the Beats became celebrities and ‘Beat Generation' became a household name.

In 2010, a film entitled "Howl" was released staring James Franco as Ginsberg and Jon Hamm as Ehrlich. The film is a psuedo-documentary, with all spoken lines in the movie being taken directly from interviews with Ginsberg, court transcripts, and the poem "Howl" itself. From these sources, the story of the film intertwines re-enactments of the famous Six Gallery reading, the trial, and an animated interpretation of the poem.

As a film, it highlights the cultural mood that was present in the 1950s that led to the creation of the work, as well as some of the fear that was present at the time that would lead some to wish to silence opposition voices to the establishment. A subtle reference to McCarthyism is mentioned during one of the trial scenes, which was a major national scare during the 1950s where thousands of U.S. citizens were arrested on charges of being communist sympathizers.

In no small part because the poem is read and even visually interpreted, the film is a fantastic tribute to the original Beat Generation poem, and is just as raw and sexual as the original publication. It is currently available on DVD.

But in an odd twist to the story of how "Howl" was a landmark in First Amendment rights, Ferlinghetti attempted to have the poem recited on Pacifica Radio in 2007 for the 50th anniversary of the Howl Trial. Fearing fines from the Federal Communications Commission (FCC), Pacifica refused to air the reading. Even 50 years after the history-making First Amendment trial, "Howl," it seems, is still too dirty.

So perhaps Ehrlich was correct when he said in his closing statements of the trial, "The battle of censorship will not be settled by your honor's decision, but you will either add to liberal-educated thinking, or by your decision you will add fuel to the fire of ignorance. Let there be light. Let there be honesty. Let there be no running from non-existent destroyers of morals. Let there be honest understanding."

1956 - City Lights Books out of San Francisco publishes “Howl and Other Poems.”