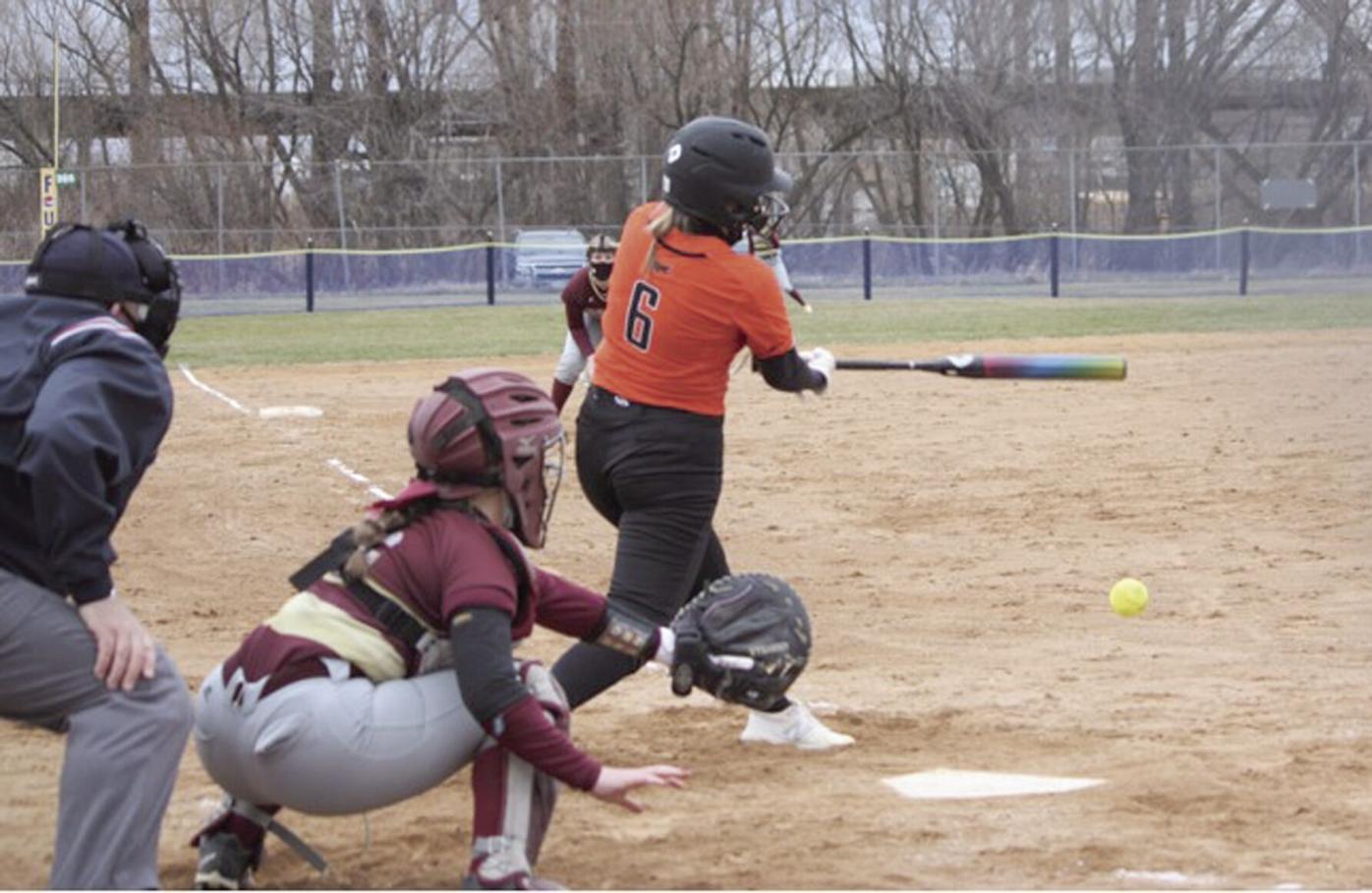 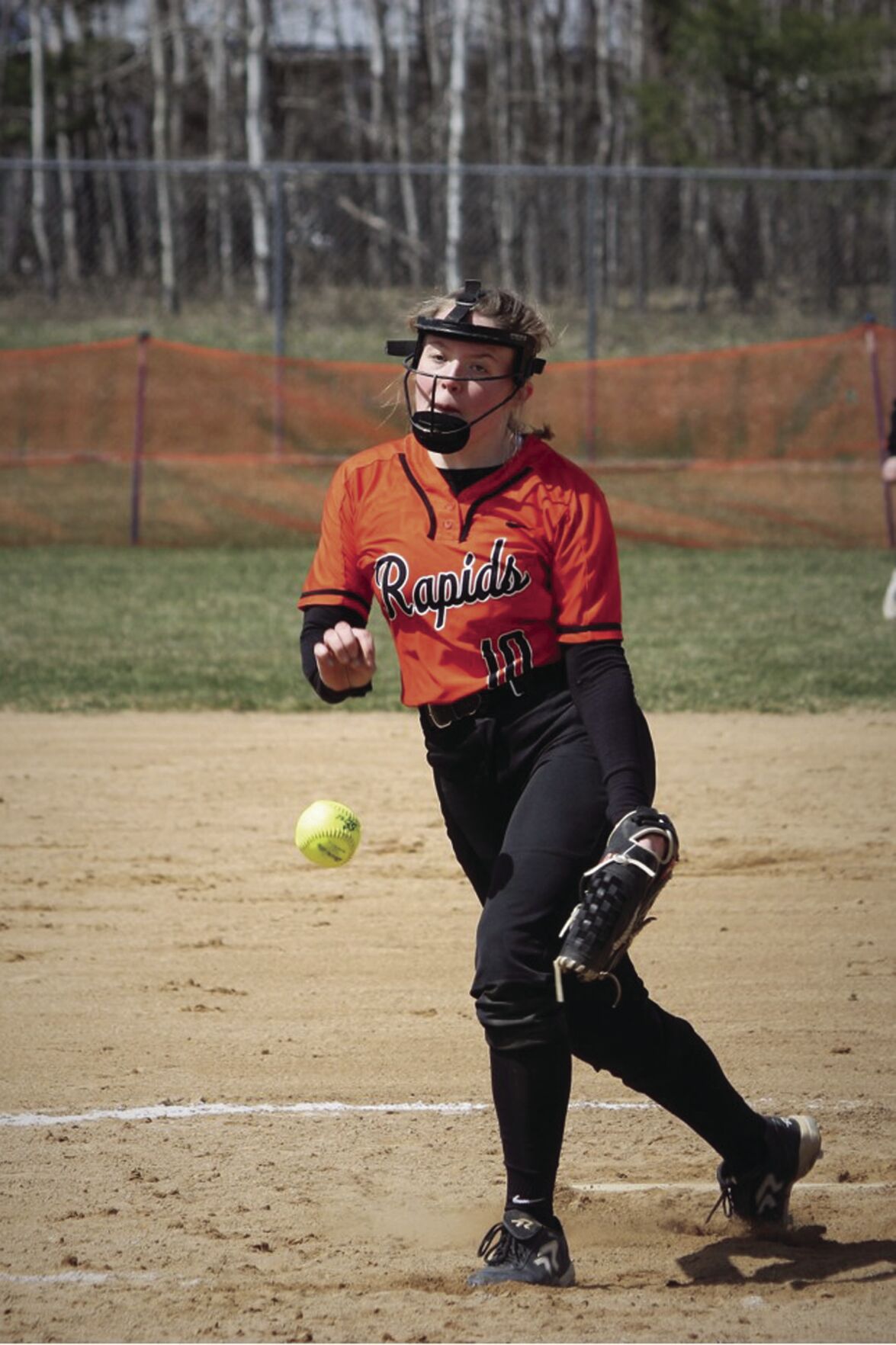 Thunderhawks junior pitcher Hannah Kinnunen has handled the brunt of the pitching for the Thunderhawks this season.

Thunderhawks junior pitcher Hannah Kinnunen has handled the brunt of the pitching for the Thunderhawks this season.

GRAND RAPIDS — The Grand Rapids High School fastpitch softball team was busy in recent action, winning two of three games in the Iron Range Conference Tournament in Grand Rapids Friday and then winning both ends of a doubleheader on Saturday.

Following are results of the play:

CLOQUET — The Thunderhawks lost a close 3-2 contest to Cloquet on April 22, in Cloquet.

Cloquet led 3-0 after two innings but Grand Rapids scored single runs in the fifth and sixth innings to pull to within 3-2. However, the Thunderhawks were unable to score the equalizer.

Amanda Paul pitched a three-hitter on the mound for Cloquet, allowing one earned run while not issuing a walk and striking out 11.

Junior Hannah Kinnunen pitched well for Grand Rapids in the loss. In her seven innings of work, she allowed five hits and just one earned run while walking two and striking out four.

Dana Jones had two hits with a double and a RBI for Cloquet.

Tanner Eck and Addie Linder both had doubles and one RBI for the Thunderhawks.

GRAND RAPIDS — In its first game of the IRC Tournament which was conducted in Grand Rapids, the Thunderhawks ripped International Falls 14-0 in a four-inning contest.

Addie Linder hurled a no-hitter on the mound for Grand Rapids, walking two and fanning 11 in her four innings of work.

In its second game of the IRC Tournament, Chisholm came away with a 14-7 victory.

Chisholm led 9-5 after three innings, and the Bluestreaks scored four more times in the sixth inning for a 13-5 advantage. Grand Rapids scored two runs in the bottom of the sixth inning to pull to within 13-7, but that was as close as the Thunderhawks would get.

Grand Rapids committed seven errors in the game which cost the team dearly.

Lindsey Tulla pitched the first inning and gave up nine runs. She walked four and gave up four hits.

Addie Linder pitched the final six innings and yielded five runs while giving up four hits, walking four and striking out an impressive 12.

In their third game of the IRC Tournament, Grand Rapids topped Mesabi East 6-5 in eight innings.

The Thunderhawks rapped out a dozen hits in the game.

Addie Linder pitched the distance for Grand Rapids in picking up the win. In her eight innings of work she gave up five runs on six hits while walking four and fanning eight.

GRAND RAPIDS — Grand Rapids pounded Princeton 13-1 in the first of two games for the Thunderhawks at home on Saturday.

The Thunderhawks scored two runs in the first inning, four in the second, two in the third and ended the game by the mercy rule with five more runs in the fourth inning.

Hannah Kinnunen pitched five innings to pick up the win on the mound, giving up two hits and one run. She struck out one and did not issue a walk.

GRAND RAPIDS — In their second game on Saturday, the Thunderhawks defeated Bemidji by a 10-5 score.

Grand Rapids scored seven runs in the second inning to lead 9-1, but Bemidji scored four in the top of the third to cut the lead to 9-5. However, the Thunderhawks scored the final run of the game in the sixth inning as they took the win.

Hannah Kinnunen pitched a complete game, allowing four runs and six hits for Grand Rapids in getting the win. She walked three and struck out 11.

Lexi Tatro was the losing pitcher for Bemidji, allowing 10 runs on nine hits while walking three and striking out five.

Grand Rapids is now 6-4 for the season. Its game against Esko on Monday was postponed because if inclement weather. It faced Greenway at home on Tuesday and will remain home against Hermantown on Thursday, April 29, in a 4:30 p.m. contest.