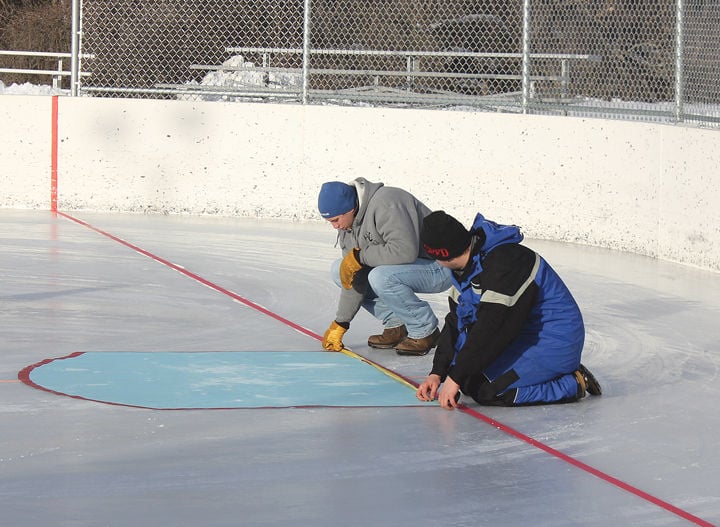 Preparations for Grand Rapids Hockey Day started last weekend at the rink near Southwest Elementary School in Grand Rapids. Bleachers were placed and the ice striped. The outdoor rink will host hundreds of hockey enthusiasts this Saturday as the city and the Grand Rapids High School Thunderhawks welcome Holy Family for an old-fashioned outdoor hockey game in celebration of the sport’s tradition and in recognition of the city and county’s 125th anniversary. 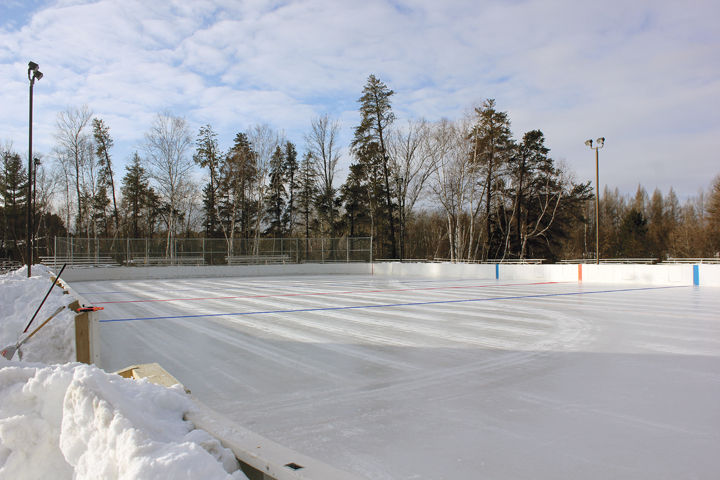 The rink at Grussendorf Park in southwest Grand Rapids will be ready for Saturday’s game.

Preparations for Grand Rapids Hockey Day started last weekend at the rink near Southwest Elementary School in Grand Rapids. Bleachers were placed and the ice striped. The outdoor rink will host hundreds of hockey enthusiasts this Saturday as the city and the Grand Rapids High School Thunderhawks welcome Holy Family for an old-fashioned outdoor hockey game in celebration of the sport’s tradition and in recognition of the city and county’s 125th anniversary.

The rink at Grussendorf Park in southwest Grand Rapids will be ready for Saturday’s game.

The tradition of outdoor hockey will be celebrated throughout the state with Hockey Day Minnesota this Saturday. In Grand Rapids, our own version of this new annual event will welcome fans to cheer on the Grand Rapids boys hockey team as they host Holy Family Catholic at the outdoor rink at Grussendorf Park.

The event has been organized by the City of Grand Rapids in conjunction with celebrating Grand Rapids and Itasca County’s 125th anniversary.

This will be the first outdoor game for our high school teams since Hockey Day in Minnesota was held on Pokegama Lake in January of 2013. The junior varsity game is scheduled for a 12:45 p.m. start and the varsity game gets underway at 3 p.m.

The rink is located at Seventh Avenue Southwest off of Golf Course Road near Southwest Elementary School.

Parking is available in a four-block radius from Seventh Avenue to Third Avenue and along Southwest Seventh, Eighth and Ninth Streets. Additional parking will be available at the parking lot behind the Ground Round along Golf Course Road where shuttle bus rides will be provided to the rink. Two school buses will shuttle spectators to the rink starting at 2 p.m.

The idea for the event originated in the planning of the 125th anniversary with Grand Rapids Parks and Recreation director Dale Anderson met with the planning committee for the 125th celebration. The committee was interested in planning an event in the month of February.

That’s when Anderson got an idea.

“So I thought, we have Hockey Day in Minnesota and we have a game that day against Holy Family,” Anderson said. “I think it could be possible.”

Anderson and Parks and Recreation Coordinator Tony Clafton then contacted Grand Rapids head coach Trent Klatt and activities director Anne Campbell about the idea to play the outdoor game in conjunction with celebrating the 125th anniversary.

From there, Campbell contacted Holy Family Catholic’s activities director and asked if they would be interested in playing an outdoor game. After approval from Holy Family and its coach, the city went forward with planning for the event.

Anderson said they wanted to keep it simple, but still offer a unique experience for spectators.

“We knew we didn’t want to put in the man-hours it took with the (Pokegama Lake) set up,” he said.

The city operates four outdoor rinks, three at each elementary school and the rink by the IRA Civic Center. Grussendorf’s rink was chosen because of the quality of the boards around the rink.

“It has the best set of boards and we used those boards at Hockey Day (in 2013),” Anderson said.

Since the city already manages those rinks and carries around a zamboni to maintain the rinks, they are able to consistently maintain a quality ice surface.

The main challenge is working with the weather and providing spectators a quality viewing experience.

The city brought in bleachers from various parks and hauled in snow last week to elevate the surface to offer a better viewing experience. Bleachers are set up on each end with additional seating on the east and west ends. There will be fencing on the ends with the center of the ice open on both ends.

Monday, the city started to shave the ice down to put in lines. Then the rink is flooded and prepped for the high school teams to practice on Wednesday and Thursday.

“Having top-notch ice is our biggest priority,” Anderson said.

A sound-system will be brought in and tents will be setup for concessions and for the Holy Family Catholic team.

As of Tuesday, the forecast calls for highs in the 20s, which should allow the ice to maintain a quality surface.

In addition, there will be a heated hospitality tent near the rink courtesy of Deerwood Bank which will serving food and beverages from 12:30-3 p.m.

Music will also be provided by Aaron Clafton courtesy of Grand Rapids GM prior to the start of the varsity game.