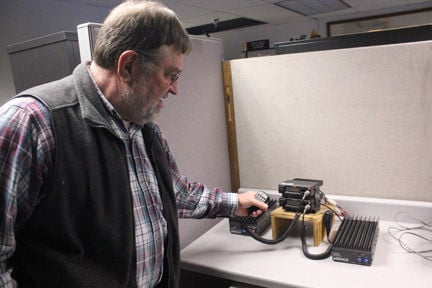 NLARC member Bob Ross shows off one of the newer model radios used at the Minnesota Interagency Fire Center. 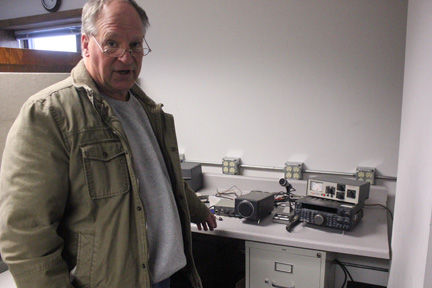 NLARC member Bob Ross shows off one of the newer model radios used at the Minnesota Interagency Fire Center.

The Internet, since the early 1990s, has changed the way the human race has communicated with one another. We can now instantaneously share text, pictures, audio, and video with people nearly anywhere on earth, provided the two places have access to the network; a world wide web.

With that in mind, it’s a reasonable question to wonder what role ham radios have in this world of modern digital communication. Well, it’s reasonable provided you’re not a ham radio operator. For members of the Northern Lakes Amateur Radio Club (NLARC) in Grand Rapids, the question is actually kind of a silly one.

“We’re kind of experimenters,” said Bob Ross, NLARC Emergency Coordinator and former president, giving the example that amateur radio operators were crucial to the creation of a lot of the protocols for error correcting for the Internet.

And this is just how the conversation with the club members began inside the Minnesota Interagency Fire Center in Grand Rapids, where the club has a room on the top floor with several ham radio units. After nearly every question was leveled at the amateur radio aficionados, it was followed by a coy grin that said “Looks like we need to school this guy on the finer points of radio communication.” And then the questions were answered, often with a vocabulary that was beyond your average journalist.

Through film and television, we have the romantic image of the amateur radio operator diligently working toward making a connection with a fellow ham in some far off place, with a poster-sized map of the world on the wall behind the radio with pushpins inserted where ever this guy managed to contact another person. His son is probably there with him, learning the finer points of shortwave radio science. NLARC President Chuck Corwin said that there are still plenty of people that fit that general description (poetics aside), but that this barely begins to describe what hams do, even just within the local club.

“We have one ham that, during the summer time, he likes to bounce radio waves off of thunder storm rain drops; it’s called rain scatter,” said Corwin. “Also, some hams like to talk using the Northern Lights.”

It’s at this point when the uninitiated may say something like, “What?” In brief, ham radios, or shortwave radios, use signals that bounce off the ionized particles in the atmosphere in order to send them back down to earth where a receiver picks them up. So as for the use of the Northern Lights, since the phenomenon is simply a colorful show of ionized particles from a plasma burst from the sun that are glowing in the ionosphere, they’re the perfect reflector for ham radio operators. Apparently, there are even people who use meteors to assist in their signal deflection.

“The one ham that works the rain drops, he also does what’s called ‘Earth-Moon-Earth.’ He bounces radio signals off the moon a quarter of a million miles away,” said Corwin.

That technique, obviously, requires a whole different set of radio knowledge since the signals have to actually leave earth’s atmosphere entirely. And once again, this is just work that’s being done by individuals within the local club in Grand Rapids.

So contrary to popular belief, hams aren’t disinterested in modern technology. Just the opposite, really. The radios themselves have become digital like everything else, computers are often used to adjust signals, and satellites have also been implemented as a tool for relaying signals to various parts of the world. But a big part of the passion of your average ham comes from the fact that these radios don’t suffer from the shortcomings of modern communication; they don’t rely on a network.

“Whenever there’s rain, wind, ice storm, tornado, hurricane; within 20 minutes, there are amateur radio operators back on the air doing health and welfare communications,” said Ross.

For all the conveniences of cell phones and the internet, natural disaster can knock out communications for hours or even days because of the loss of a tower or some other disruption in the service. Hams wear their versatility and independence of communication as a badge of honor; despite the age of technology, they are still often the first to relay important information about weather conditions, and are sometimes the only means of communication with the capability to alert emergency personnel in times of need.

As part of NLARC’s public service, they also run all communication for various sled dog races in the area, such as the White Oak Sled Dog Race in Deer River. Because they don’t need to worry about spotty signals in the rural northwoods, the radios are the most reliable means of communication for mushers on the trail.

Because of the technical aspect, and the broad use of different radio signals over the airwaves, amateur radio operators are required to get a license from the Federal Communications Commission (FCC). NLARC offers classes for those looking to take the FCC exam free of charge, though those taking the test still must purchase their own testing supplies and equipment.

For broad, everyday use, the Internet has certainly changed the game. But if we want to think about the Internet is the new kid on the block, we ought to admit that it can still learn a thing or two from papa.

For more information on ham radios or on obtaining FCC licensure, contact Chuck Corwin at 218-328-5485 or at hccorwin@yahoo.com.

In the age of the Internet, where does the ham radio fit into the equation? As it turns out, it fits right in the space it always has.