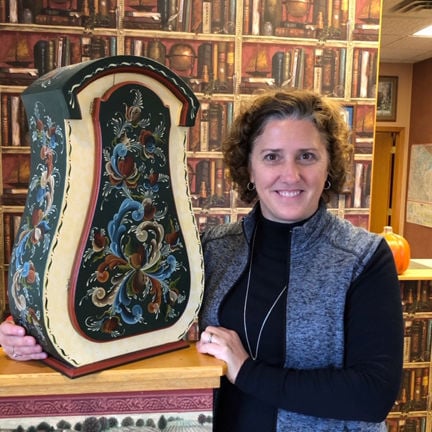 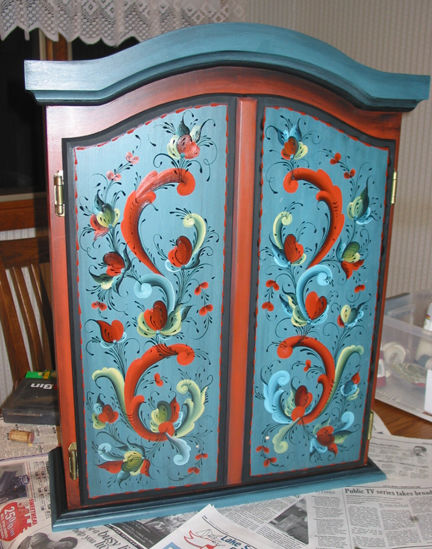 It’s a way for her to unwind and relax in the comfort of her own studio, surrounded by woodenware each screaming to be painted.

“When I paint, all my worries fall away as I concentrate on only the one stroke of paint on the piece at a time,” said Michelle Carlson, rosemaling artist, in Grand Rapids. “I also enjoy the process of designing and determining my pallet of colors.” ​

“This wonderful art form was most popular during the 1750-1850’s in all rural areas of Norway,” said Carlson. “The artists were men who would travel door to door in their valleys and paint the interior of homes, churches and buildings. They made their own paints and often would paint for food and lodging.” ​

She continued, “These original rosemalers would paint woodenware in the houses as well as the walls, doors and ceilings. They were decorating the interior of the homes since often the walls were dark and dingy due to the soot of the open hearth stoves. The rosemalers would rarely travel beyond their valleys thus their painting style and color hues were unique to their valleys.”​

Carlson has studied Rogaland, Telemark, Os, Hallingdal and Gudbrandsdal, but says there are many more styles for her to learn.​

“The Norwegian immigrants carried their beloved possessions to America by ship in the late 1800s and early 1900s,” Carlson explained. “We had a revival of rosemaling in America in the early 1950 – 1980s.” ​

Carlson first viewed rosemaling while attending a traveling exhibit at the Reif Center back in 1990 by the Vesterheim Norwegian American Museum.​

“I was quite fascinated by the linework, bright colors and fanciful flowers,” Carlson said. ​

She had been painting on canvas for many years in high school and college.​

“A local Grand Rapids woman was teaching rosemaling at the MacRostie Art Center (MAC) on Saturday mornings and this was my first exposure to the rosemaling,” she explained. ​

“I’ve taken classes from many gold medalist Rosemalers and love to collect the beautiful pieces from those rosemalers,” she said.​

When Carlson first began, she traced other rosemaler’s designs from their books.​

“Now after so many years, I make my own designs. The process of designing a pattern on a piece is very personal and as I paint, I often will add design elements until it feels complete,” Carlson said. ​

As for what she paints on, it is a wide variety, but traditionally painted on woodenware. ​

“My studio is full of woodenware including turned plates, Norwegian tines, porringers, trunks, corner cabinets and bowls, etc.,” Carlson said. “It is exciting to see a blank piece of woodenware be turned into a lovely piece of rosemaling. I paint in oil and place a varnish on the piece to protect it.” ​

Carlson’s work can be purchased and viewed on display at the MAC. In addition, Carlson does consignment work for people if someone wishes to have a specific piece painted. ​

“I’ve been a part of the MAC since moving to the area in 2002. Currently, I sell my rosemaling at the MAC, at our Twin Ports Rosemaling Festival and online with my Etsy store,” Carlson said, adding her Etsy shop is called NordicGalDesigns.​

Currently, Carlson and her husband and are planning a trip to Norway specifically to view the folk art museums and rosemaling.​

“One can see my lettering at St. Joseph’s Church Sacristy and a large plate at the Timberlake Lodge Hotel, “ Carslon said. “I love to take classes every year from other teachers to learn more about rosemaling, especially at the Vesterheim in Decorah, IA. This year, it is my goal to learn Swedish Kurbits painting as seen on Mora Clocks and canvases. In January 2020, I’m taking a class in Duluth at the Swedish Art Center.” ​

Carlson was born in St. Cloud, Minn., and moved to Grand Rapids in 2002, with her family moving into the area many years prior. She currently lives on Pokegama Lake on Crystal Springs Loop and is married to Guy Carlson. She has one adult child, Marissa, whom is attending college. ​