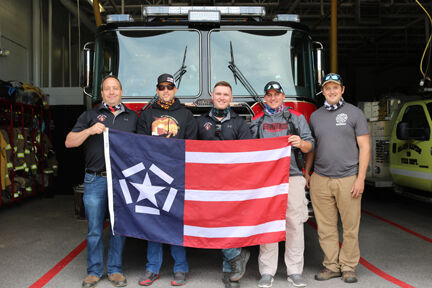 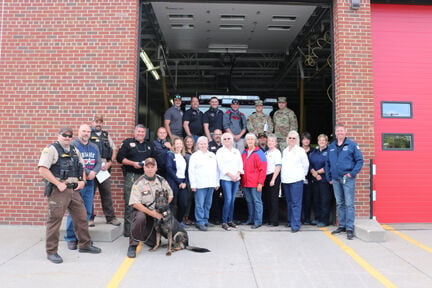 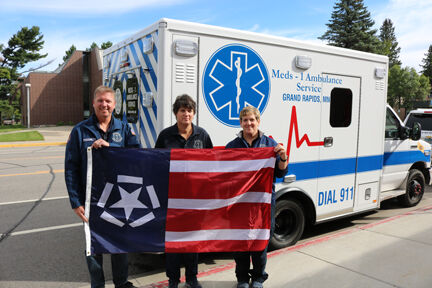 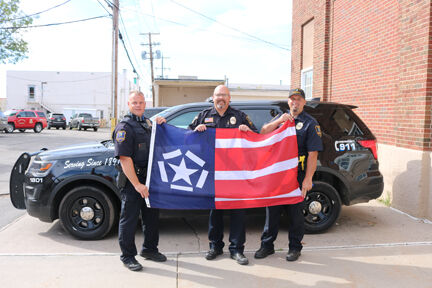 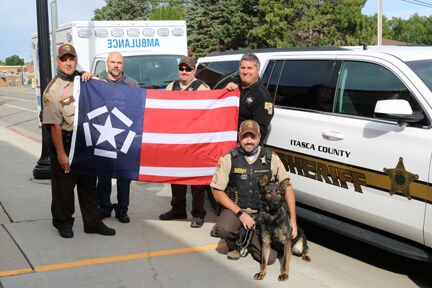 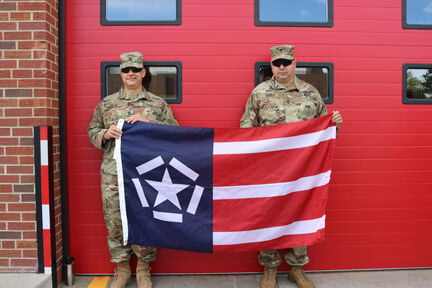 Five of Grand Rapids’ first responder groups were presented with a Freedom Flag on behalf of the Freedom Flag Foundation, the American Legion Auxiliary and the Grand Rapids Yellow Ribbon Citizens Committee on the morning of Friday, Sept. 4, 2020.

“The citizens and the city of Grand Rapids will have the distinction of being the first city in our state to acknowledge and present these flags,” said Sharon Voltz with the American Legion Auxiliary and Grand Rapids Yellow Ribbon Citizens Committee.

The Freedom Flag Foundation is a non-profit organization created to establish a tradition of remembrance, that honors the victims, heroes, and survivors of Sept. 11, 2001. Sept. 11, 2001 has now been named Patriots Day. The Freedom Flag was designed by Richard Melito in Richmond Virginia on Sept. 20, 2001. He aimed to create a symbol to display in his restaurant for patrons to remember the tragedy and triumph of Sept. 11, 2001.

There are ten elements to the Freedom Flag. The blue background represents all Americans united together for freedom. The white star is for all who have lived and died for freedom. The United State’s Pentagon and the organized protection of freedom is shown by the five white bars. The top red stripe is for the bloodshed of those who perished at the Pentagon, as well as the passengers and crew of American Airlines Flight 77.

Grand Rapids is the first city in Minnesota to present the Freedom Flags. Voltz stated letters have been sent to Senator Justin Eichorn and Sandy Layman to co-author a bill to have the Freedom Flag as Minnesota’s symbol for Patriots Day. Additionally, a letter was submitted to Representative Pete Stauber, Senator Tina Smith and Senator Amy Klobachar to make the Freedom Flag a national symbol.

The Freedom Flag was designated by then Virginia Governor Mark Warner through an executive order as the state’s official symbol of remembrance to honor the heroes and victims of 9/11.

“We thank you very much for representing our city,” Voltz stated.

For more information on the Freedom Flag or for those interested in obtaining a Freedom Flag, visit www.freedomflagfoundation.org.