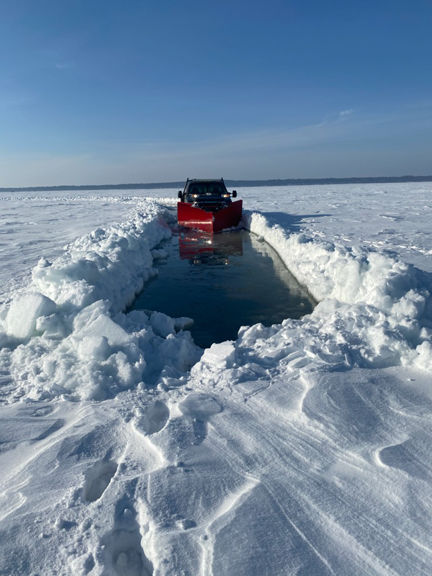 Water and slush caused by heavy snow and a weak ice base on Lake Winnibigoshish makes it nearly impossible for travel.

Water and slush caused by heavy snow and a weak ice base on Lake Winnibigoshish makes it nearly impossible for travel.

When you think of a typical ice-fishing season as a math problem, ice is usually the fixed factor with snow, wind and sleet being the variables, explained Kim Leonhardt, owner of High Banks Resort on Lake Winnibigoshish.

“This winter, ice is the variable,” she said.

Kim and her husband Rick Leonhardt have owned the resort since 2004 and have never seen ice conditions as bad as they are this year. They opened for ice fishing on Jan. 3 and quickly realized the “situation was at a point of no return,” says Kim as she explained that the ice base was not strong enough when the storm after Christmas dumped 15 inches on the lake.

With a ratio of about 30% ice and 70% snow, the weight of the snow pushes down causing water to seep up and result in slush conditions. Normally at this time of the year, the Leonhardts say Winnibigoshish ice is about three feet thick. Now, it’s about 13-15 inches.

During the winter High Banks Resort plows a public access to the lake as well as about 25 miles of road on the lake for fishing groups. This year, they’ve only been able to plow about 1.5 miles and have had to close down the public access. Wheel-houses are not allowed and even snowmobiles are getting stuck.

The winter revenue High Banks collects with ice fishing access is down 93%. During just one average weekend in winter, the Leonhardts would see between 100-150 wheel houses use their access to the lake. Now, there are none.

“So we’re operating at minimum capacity because the large plow equipment cannot get out there,” Kim explained. “It’s been so limiting and we’re not accustomed to that.”

The Leonhardts feel for the fishing groups who like to move about the lake to try different depths and areas but this year’s conditions do not allow for travel.

High Banks normally stays open for the winter season until mid-March but will close after the walleye season ends on Feb. 23.

“We just hope the ice will maintain until then,” added Kim.

It’s not just High Banks that’s feeling the hit. Resorts throughout the region and other businesses that rely on winter fishing are hurting significantly as well. Last week, the Leonhardts and about 40 other resort and business owners held a meeting with Senator Justin Eichorn to discuss opportunities to get some state disaster relief. Kim even pulled together a portfolio of testimonies from a five-county area complete with photos of the conditions for the Senator to bring to St. Paul.

“From Red Lake to Bigfork to Kabetogama to Grand Rapids, Cass Lake, Longville and beyond - this is not just a local concern, it’s regional - a big area,” said Kim.

With the tourism industry, many fishing-associated businesses like gas stations, bait shops, grocery stores and more are impacted, according to people Kim has met.

“Some said sales have declined between 30 and 100% for the month of January,” she said. “It’s extremely, extremely difficult to operate on that much of a loss. That’s why we’re reaching out to the legislature for disaster relief funding - whether through grants or loans. We need support to get ready for the summer season.”

During the meeting with the senator, those in attendance had the same message. Resort owners who have been in the business for more than 30 years said this is the worst they’ve ever seen for ice conditions.

John Thelen, with Lindy Fish Television, spoke about how limited travel on area lakes is hurting his marketing for the fishing industry. He expressed concerns about the impact it will have on further years as tourists will have to choose other activities and it may be difficult to get them to return to northern Minnesota. Thelen also spoke about the importance of wheel houses for getting families involved in the sport of ice fishing.

Kim said she knows of some resorts that have had to close down for the season already and “some didn’t even open at all because of so much slush.” For most resort owners, their business is their entire livelihood. And with accessory businesses also feeling the slump, there aren’t other temporary job openings.

“It’s a significant trickle down effect,” commented Kim who has been contacting all of her March reservations as quickly as possible to allow them to make other arrangements. “It’s completely crushing. But, they understand and appreciate the call. Many have rebooked for next year.”

The area business owners are working with Hospitality Minnesota, a state lobbyist group, to help inform legislators of the situation. Senator Eichorn plans to work with Rep. John Persell and other area lawmakers to bring requests for state aid forward this legislative session.

“It’s like an act of God - that much ice and that much snow is unheard of,” continued Kim of the rare mix.