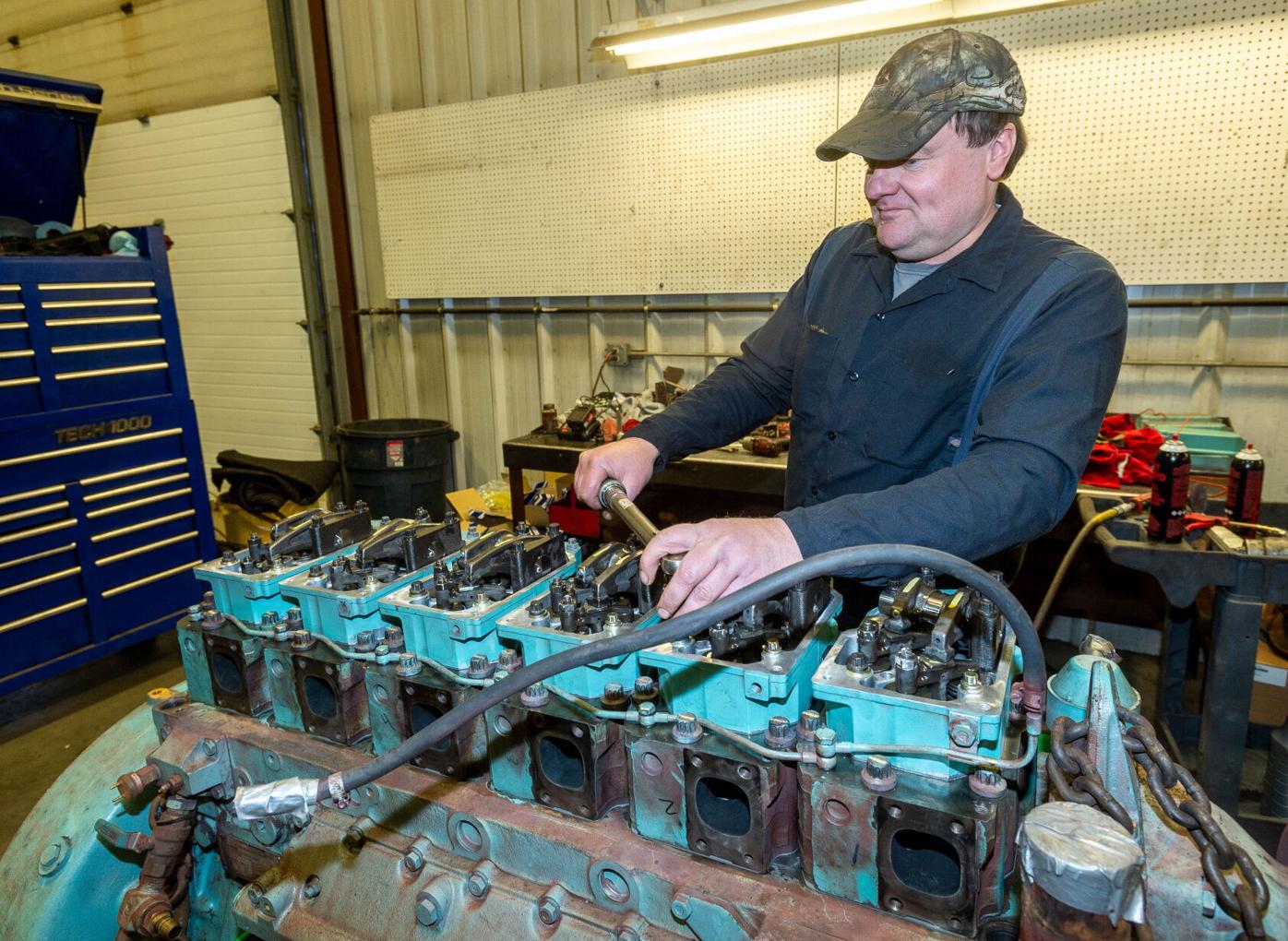 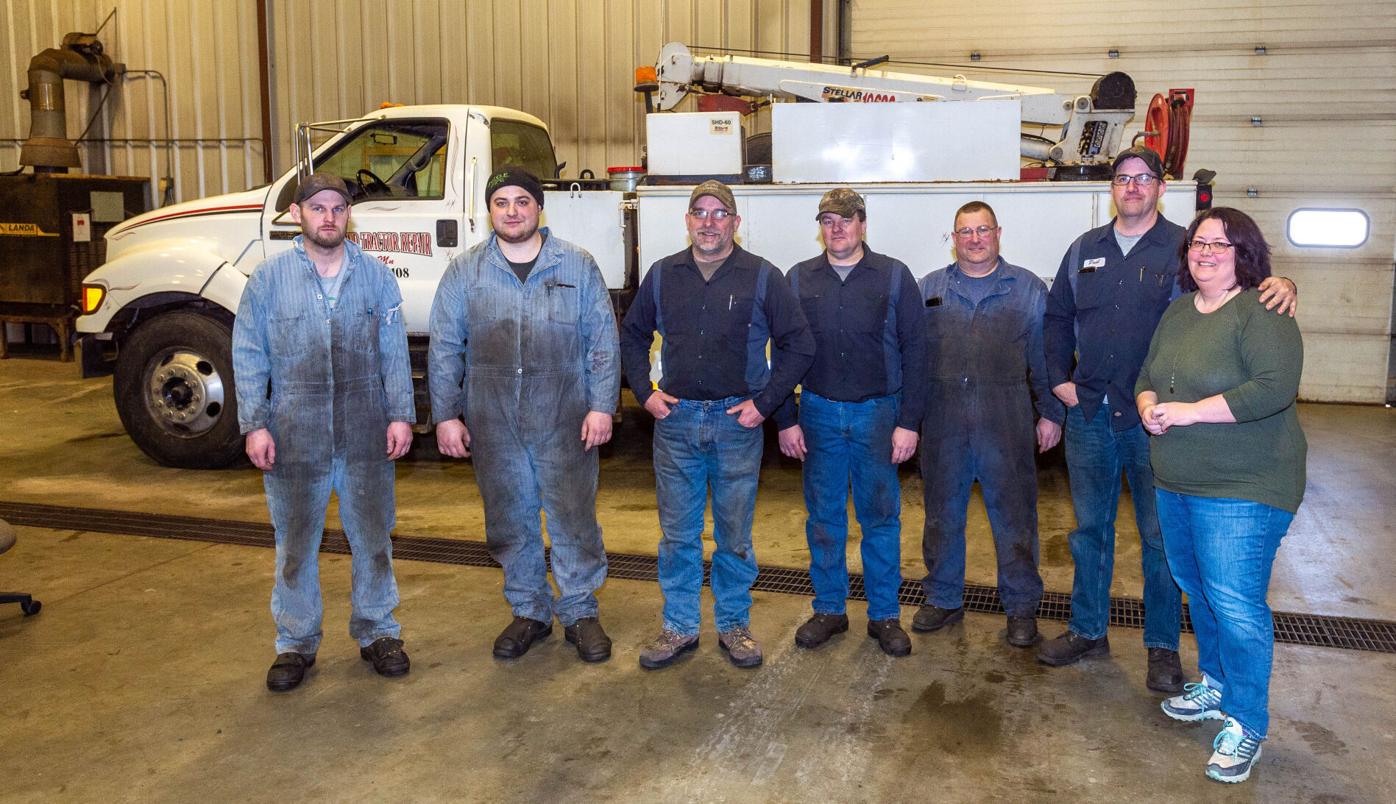 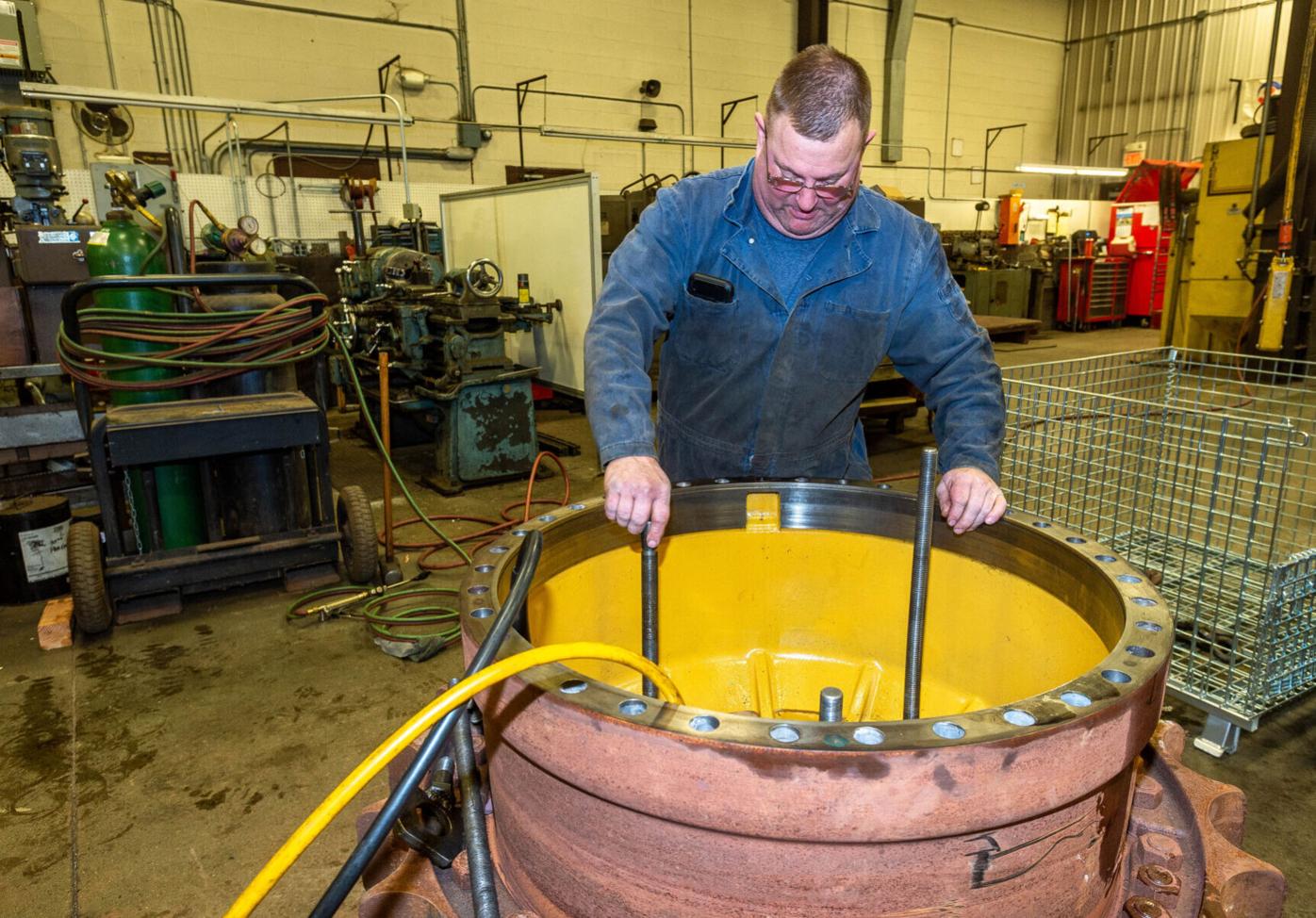 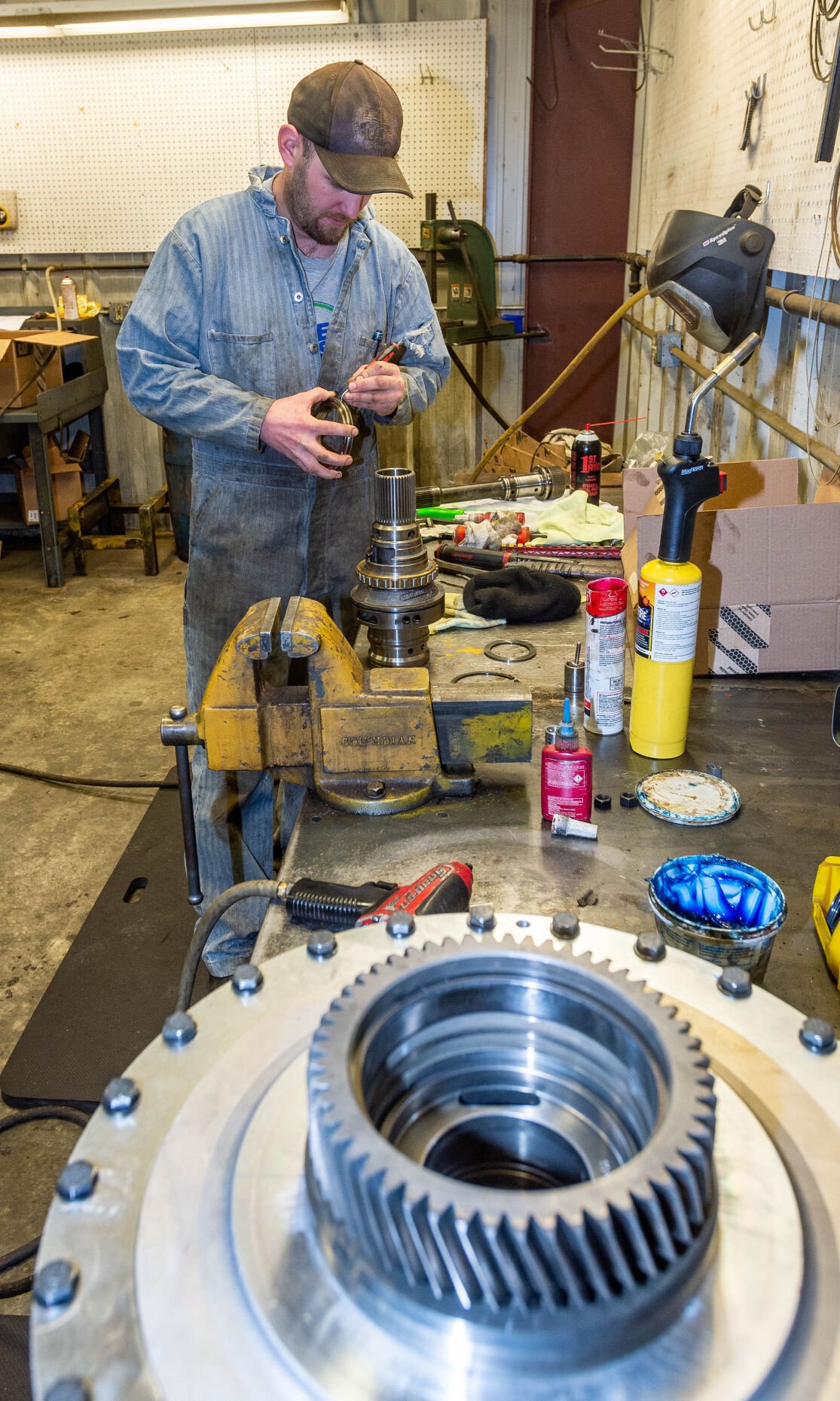 VIRGINIA — When it comes to owning a business a lot of factors can contribute to success or failure — two of those being timing and location.

For Paul and Naomi Ranisate both have played a huge role in the growth of their company, Northland Tractor Repair.

Since buying the truck and equipment repair business in 2018, they have moved to a new location, added employees, and expanded services at a whirlwind pace that has at times felt overwhelming but nonetheless satisfying.

“When we took over, basically it just felt like we were running someone else’s business because that is what we were doing. And then you get in a little further and you start to make little changes here and there and then you make a huge change like (moving) and then it becomes your own business,” Paul said. “Something you worked to build yourself instead of something that somebody else worked to build and you’re just kind of maintaining it.”

Currently located in Virginia, in the former Interstate PowerSystems building west of Menards, Northland Tractor currently has five full—time employees (seven when you count Paul and Naomi) and a list of customers a mile long.

The longtime Iron Range business got its start in 1986, when it was opened in Buhl’s Whiteside Industrial Park. Paul, who had studied heavy equipment repair at Hibbing Community and Technical College, began working there as an employee in 1996, his first year as a mechanic.

He left in 2012 to take a job with the Minnesota Department of Transportation but a few years later an opportunity to return in a different capacity surfaced.

“The owner (of Northland Tractor) was getting ready to retire and on a weekend fishing trip, one of the employees came up with the idea that I should buy it,” he said. “And we did.”

The move didn’t come out of nowhere, the couple said. The thought of owning a business was something Paul considered even during his initial stint at Northland. At the time, however, with a young family and the responsibilities that come with that, the timing wasn’t right.

When the idea came up again, the stars were more aligned.

“When he worked (for Northland Tractor) it was something that was always kind of in the back of his mind, you know, the possibility” Naomi said.

Soon after buying Northland, Paul and Naomi realized that while business was good, their location wasn’t optimal.

“Nothing against the city of Buhl but the industrial park over there is older and out of the way and I never, ever considered in my whole life that it was an odd location until (I was a) business owner, and you start going to other businesses, and people are calling you and can’t find where you are at,” Paul said.

As fate would have it, opportunity soon knocked in the form of a phone call from Dan Snidarich, area business representative at the International Union of Operating Engineers, Local 49, where Paul is a member.

“He had had a meeting with the folks at Interstate and they were going to close the facility and all the guys were going to get laid off and Dan wanted to know if there was anything we could do as far as taking care of the customers or some of their employees,” Paul said. “The next thing you know he’s calling us and telling me they are putting the place up for sale and then we are looking at it and man the ball just kept rolling.”

Snidarich said he represented the workers at Interstate Power Systems and Northland Tractor and when he heard Interstate was leaving and going to sell their shop, he picked up the phone.

“I knew that the Northland Tractor facility was near maximum capacity, so I let Paul know that the Interstate building was open for offers,” Snidarich said. “Paul and his wife decided to look into it closer. Paul is not only one of our Contractors but is also a member as well.”

The couple jumped at the opportunity.

“I was hoping for things to work out for Paul to get a bigger, more modern facility and to possibly be able to employ some of the 49ers displaced from Interstate PowerSystems closure. Little did I know that things would actually work out in both scenarios,” Snidarich said.

In the end it did work out, but there were a few bumps along the way, starting with the financing. Naomi said issues that were slowing the deal arose with the bank they were initially working with at the start of the transaction and that if it wasn’t for another timely phone call — this time from Tom Bartovich, the Regional President of American Bank — the deal might not have happened.

“If it wasn’t for American Bank, we never would have been able to do what we did,” she said.

The couple knew Bartovich through their kids playing hockey together, and when he called and said, “hey can we see what we can do for you,” that was all they needed to hear.

The sale eventually closed, and they moved the operation to the former Interstate building at 1921 South 16thAvenue West in Virginia.

And, as Snidarich had hoped, not only did the acquisition provide a sort of turn-key situation in a prime spot, Paul and Naomi were able to save at least one job, hiring a 25-year employee of Interstate along the way.

“He was able to stay and we were able to move in and it has been nothing but good ever since. Location, location, location,” Paul said. “With the set up they left behind all we needed to do was move a guy in with a toolbox and start working. We could never find this deal anywhere else ever again.”

Northland Tractor advertises itself as a full-service truck and equipment repair facility, parts locator and machine shop, but it is much, much more than that.

In fact, they do a little bit of everything: From working on mining equipment (Naomi said they have at least one mechanic who is always working on mining related stuff), to having contracts with different entities to provide parts for shovel buckets.

They also do a lot of fleet maintenance with companies like Frabonis and Sunny Hill; work on anything from fire trucks, to skid steers, to forklifts, to wiggle wagons; and work with local contractors like Mesabi Bituminous and Uhland brothers to name a few.

Beyond that they sell used and aftermarket parts for equipment; do DOT inspections (they have three people qualified to do that along with Paul); offer welding and fabrication in their machine shop; can do line boring, rebuilding of cylinder heads and engines; and they have a mobile mechanic who has been extremely busy.

And since moving to the new location, and getting their newest mechanic, they have also been doing a lot of truck work — the type Interstate was doing — taking on many of their former customers.

“I believe the move has benefited local trucking firms, mining and construction companies who have had their repairs and services done at this facility for years. With the loss of Interstate PowerSystems that meant that these businesses would have to find other places to outsource their repair needs, in locations as far South as the Twin Cities,” Snidarich said. “Now these local, great paying jobs with benefits stay in our area community and their taxes are paid to the City to help with things such as street repairs, property levies (and more). “

The Ranisates say Northland Tractor offers as diverse a selection of services as possible because they saw a need for it in an area that, while there are niche repair businesses around, didn’t have a lot of repair shops that could tackle just about any piece of equipment from any number of manufactures or industries.

It also offers them the ability to keep busy regardless of the economic ebbs and flows an area that relies on an industry like mining can see.

“We try to keep our work a little bit diverse as far as not leaning too heavily on the mines. When we took over that was probably half the business. But just from a stability standpoint we had to do things a little differently and spread our wings a little bit and dabble in some different things to make sure we maybe could stay stable through the ups and downs of the mining part,” Paul said.

Business since the move has been good so far.

Almost too good, so there are no plans for expansion at the moment. The process has been a whirlwind ride from start to this point.

Naomi explained that there has been a lot of change in the two years – from deciding to buy a new business, to a sudden need for more employees, to the move, to the couple trying to figure out if they could both work there full-time and still pay their bills.

“It just keeps growing. It’s a little hard to put the brakes on and take a breath,” Naomi said. “But it’s been really good.”

Paul agreed, adding that while they may be stretched a little thin at the moment, it’s a good problem to have.

“This was a fairly significant expansion already. We just about doubled our space that we had, and we added an extra mechanic and we moved one of our mechanics into an office position, where he is like the parts guy or service manager type of thing,” Paul said.