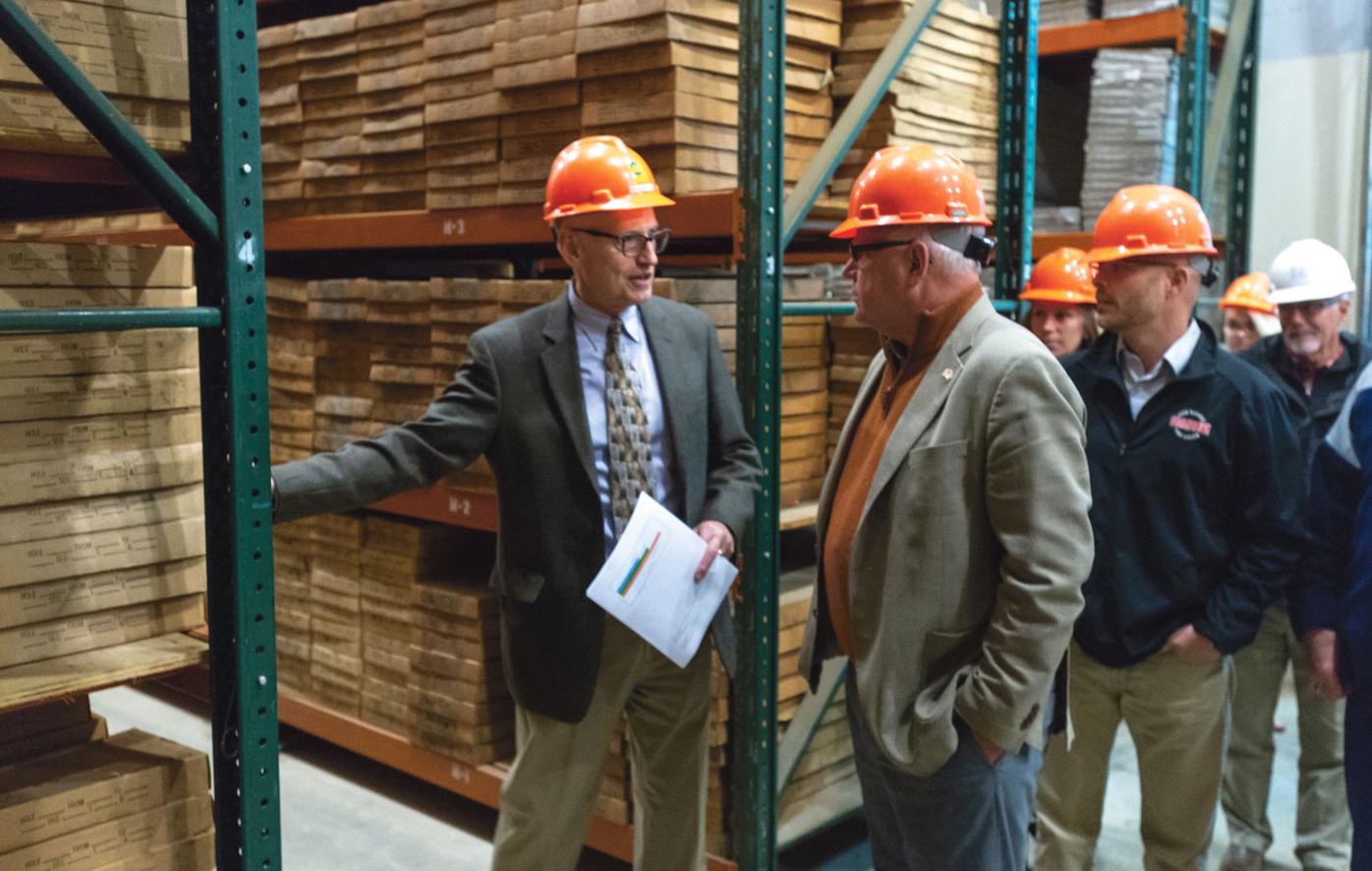 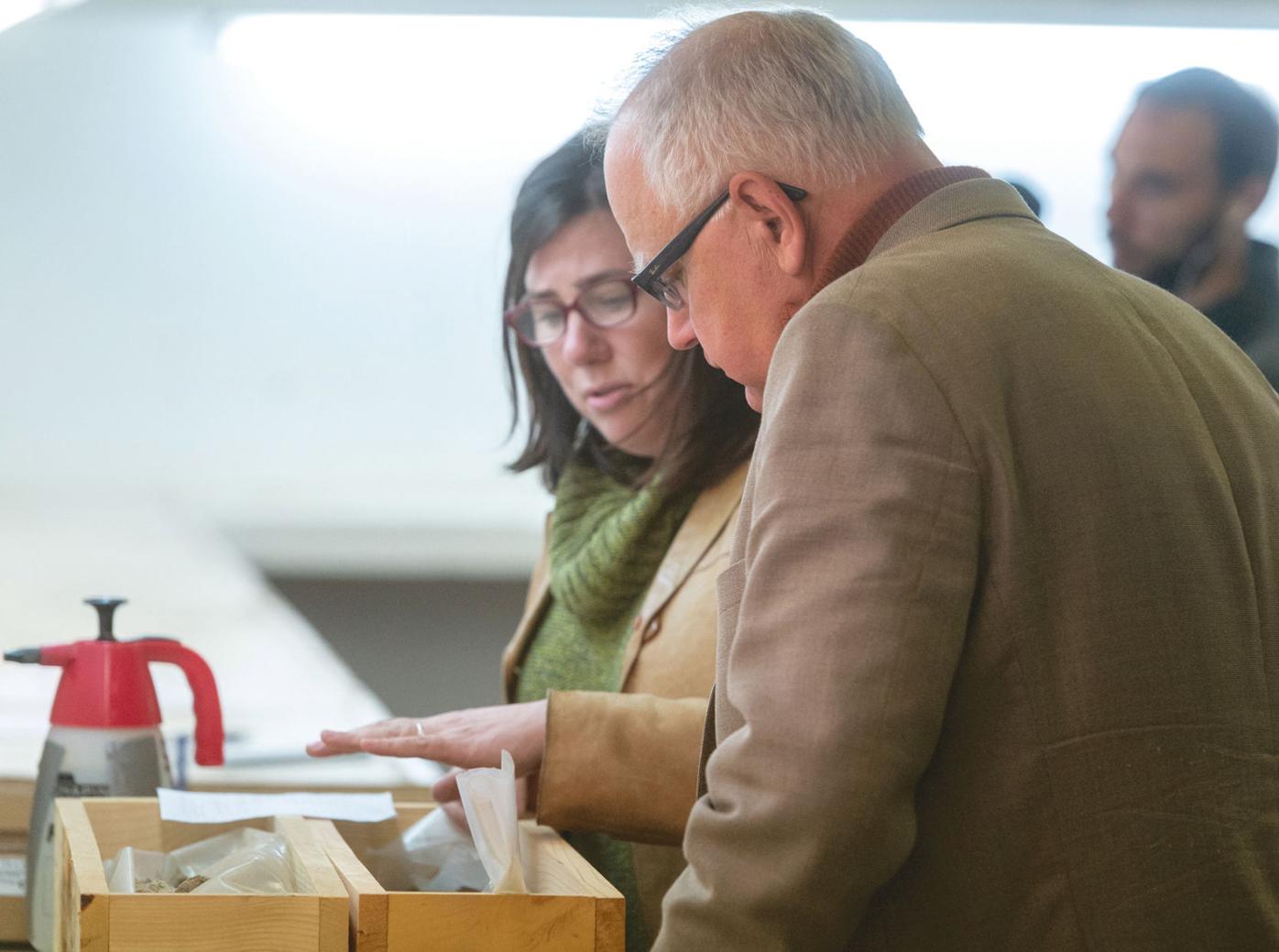 HIBBING — Explorers, engineers and geoscientists interested in mining search for records of the mineral deposits captured in bedrock.

But the deposits in northeastern Minnesota are difficult or sometimes impossible to assess since most are buried under glacier sediments.

In response, the state Department of Natural Resources Lands and Minerals Division maintains the Drill Core Library in Hibbing, where staff store drill core samples to provide glimpses of the bedrock to scientists who use them to develop ideas about the capacity of the materials to host mineral resources.

In October, Gov. Tim Walz visited the drill core library amid the 3 million lineal feet of samples including 7,000 mineral exploration cores; 1,500 roadway and bridge foundation cores; and 500 cores collected during scientific, government and academic research. Here, the archived cores have been reused for the advancement and evaluation of several copper-nickel, gold, titanium and iron deposits and prospects, from the discovery of three nonferrous mineral deposits, including Birch Lake, Maturi and Tamarack to the evaluation of proposed PolyMet and Twin Metals projects.

The governor arrived as part of his statewide bonding tour meant to help him develop a bill proposal due in January. State legislators from the House and Senate committees, but Walz tried a new approach and made the rounds himself.

“After last legislative session, the Iron Range voices have been heard loud and clear,” Walz said. “The major work that has to be done is bonding.”

During his tour, the governor expressed an expectation of recommending an estimated $1.5 billion in bonding while having to cut other proposals from local and state agencies that totaled $5 billion. In Hibbing, the DNR is seeking roughly $4 million in bonding assistance to build a second, 3 million lineal foot building to essentially double the size of the drill core samples library.

Peter T. Clevenstine, an assistant director of the DNR Lands and Minerals, and his staff showed the governor core drill samples from the Duluth Complex and copper-nickel from deposits near Babbitt.

“This is not a warehouse,” Clevenstine said, showing the governor that there were 2 tons of samples on every shelf. “This is a library and we store samples so people can use it.”

Walz responded: “This is a living place. When I looked out here, I thought I’d find the Ark of the Covenant.” His saying was met with laughter from DFL State Sen. David Tomassoni and Reps. Julie Sandstede and David Lislegaard.

Clevenstine described how his crew previously toured the updated Wilson M. Laird Core and Sample Library on the University of North Dakota campus in Grand Forks. N.D. legislation requires rock cores and samples from oil wells, as core samples are required by the Minnesota Legislature to be submitted and kept by the DNR.

In 2013, Gov. Jack Dalrymple and the North Dakota Legislature authorized to make $13.6 million available to add 28,000 square feet of room in addition to improvements to labs and offices. The library had been applauded for conducting research that drew intertered in the Bakken Formation, one of the largest deposits of oil and natural gas in the U.S. State leaders, oil industry executives announced the expansion in 2016 when they celebrated the facility as part of the North Dakota Geological Survey under the state Industrial Commission’s Department of Mineral Resources. The idea behind the project was to provide oil-minded individuals and companies with the material and information to drill based on what they found there, not just drill and hope that things went their way.

Clevenstine related that visiting the site in Grand Forks helped his staff determine what was needed at the library in Hibbing when it came down to a bonding request.

“Minnesota is no slouch, as we have a state-of-the-art core library,” Clevenstine said. “It’s not just about storing core samples, but investing in how we use the samples for observation and research” He added: “We want to be able to take the core as the state requires and we’re always learning more about critical materials” for our mining industry in the region.

“To lose this is losing opportunities,” Walz expanded of the core drill sample library in Hibbing, as its capabilities offer mining companies and groups chances to explore and map out the region for current and potential possibilities.

Since taking office this past January, the governor has taken an approach to bonding that is outside the norms of state governments past. He proposed a bonding bill during the 2019 legislative session — a so-called off-year for projects typically sought after during even years. The bill did not pass.

Now, he is undertaking the same methods he did as a member of Congress. The administration has set up a website through the Minnesota Management and Budget Office to detail all state bonding projects and include information on the requesting parties, an overview of the proposal including the cost and function, and expected outcomes. The information is meant to educate taxpayers, who are welcomed to make comments.