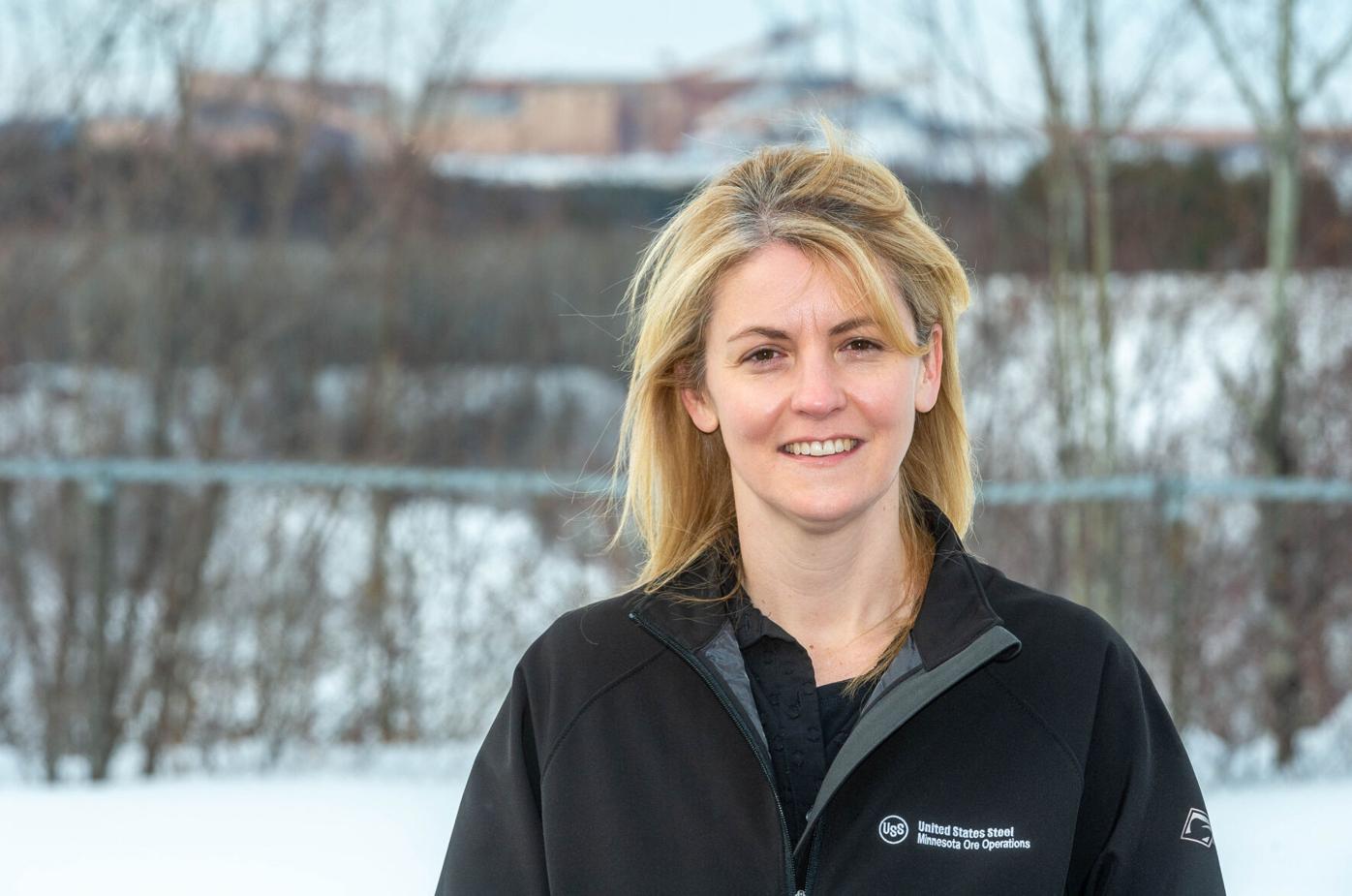 Chrissy Bartovich poses outside the Administration Building at US Steel in Mountain Iron. Bartovich is the new Chair of the Iron Mining Association of Minnesota. 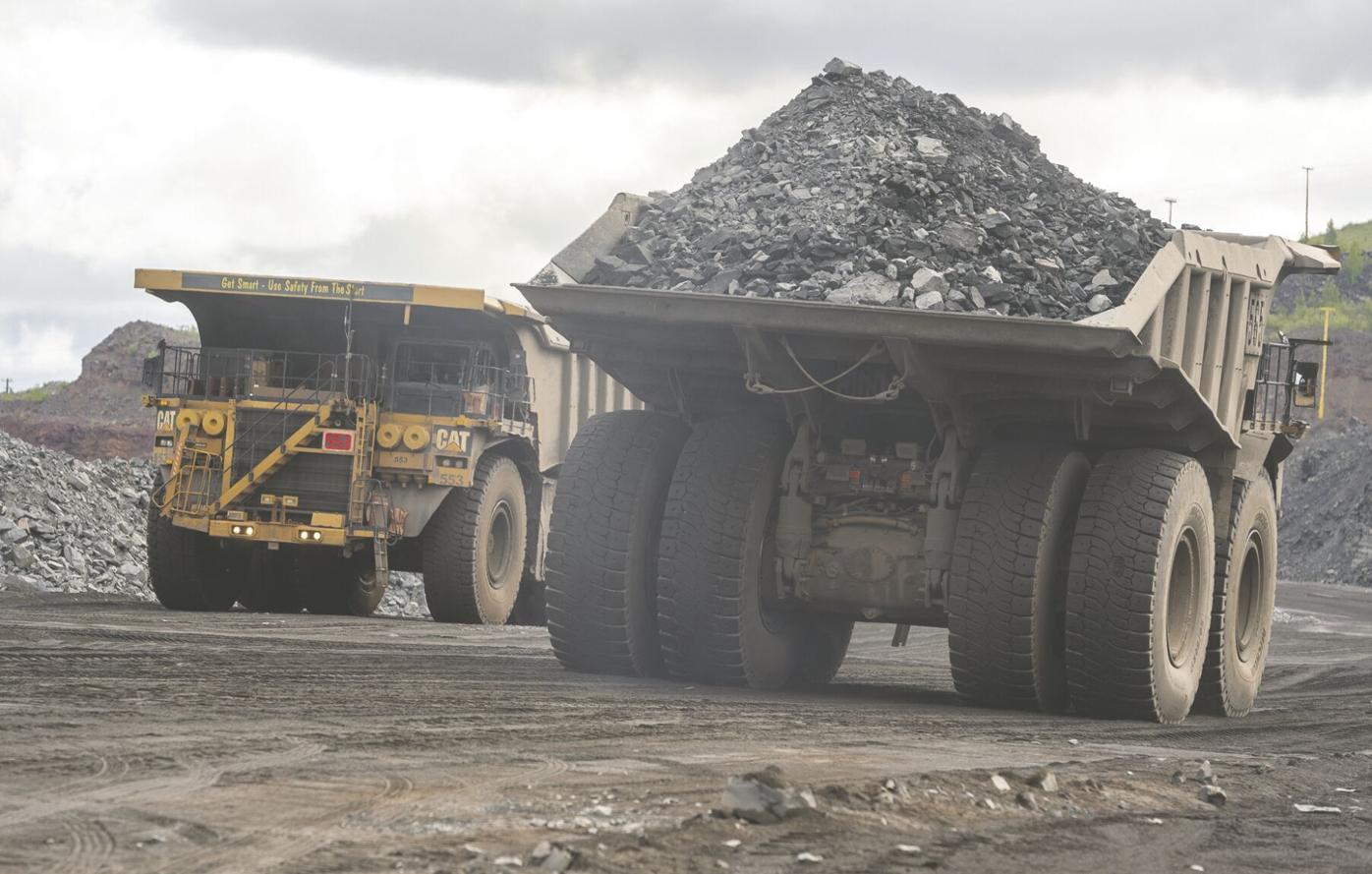 Filled trucks head to the crusher as empty truck arrive to a loading site at MinnTac in a process that continues 24 hours a day 365 days a year. 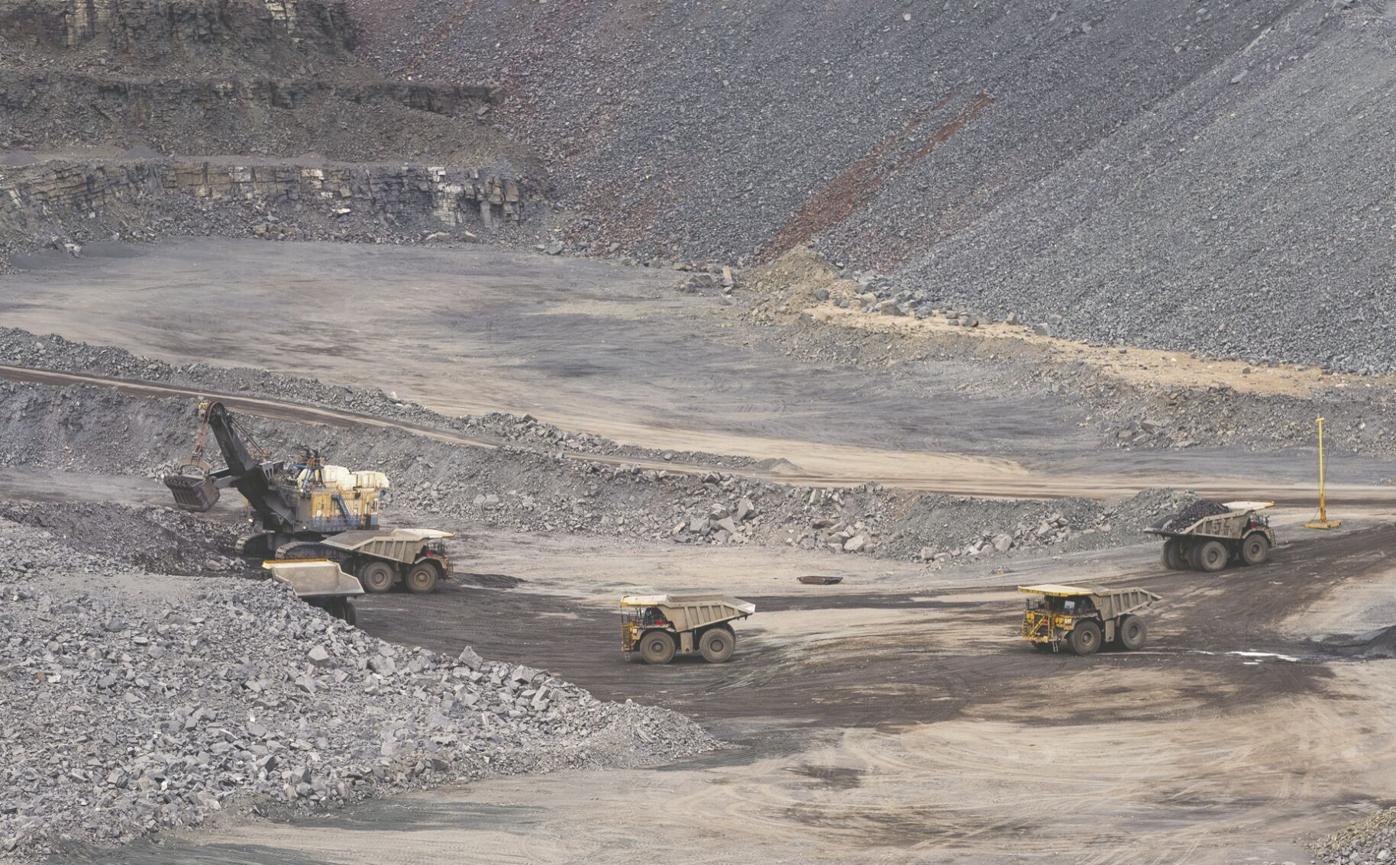 240 ton trucks are dwarfed by the size of North America's largest taconite mine at MinnTac. 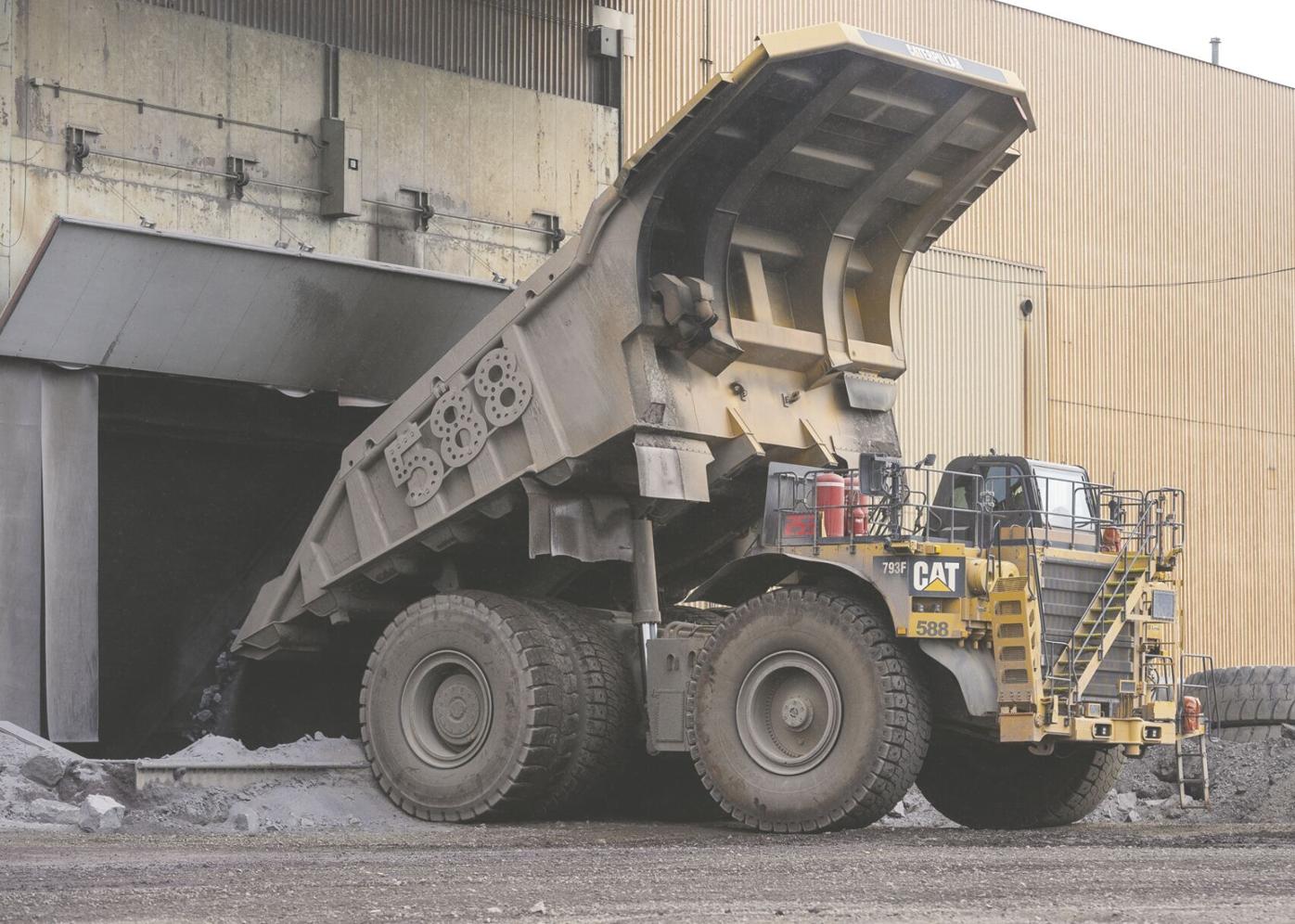 More than 250 tons of taconite ore are dumped into the MinnTac crusher in a few seconds.

Chrissy Bartovich poses outside the Administration Building at US Steel in Mountain Iron. Bartovich is the new Chair of the Iron Mining Association of Minnesota.

Filled trucks head to the crusher as empty truck arrive to a loading site at MinnTac in a process that continues 24 hours a day 365 days a year.

240 ton trucks are dwarfed by the size of North America's largest taconite mine at MinnTac.

More than 250 tons of taconite ore are dumped into the MinnTac crusher in a few seconds.

Even as Chrissy Bartovich advanced through her first few years of college, she wasn't sure what career path to choose.

Until an internship at U.S. Steel's Minntac Mine in Mountain Iron came along.

It's a long way career-wise, but not geographically, from growing up in the northern Minnesota communities of Bigfork and Virginia.

“I'm really proud of the work that I do,” Bartovich, of Mountain Iron, said. “In every call that we're on, safety is extremely important. Environment is extremely important. That message is really driven home to every employee and I never have to battle for anything. People step up and they know they're required to do things and we need to do things. We all live here so we all want to do things and make things better. There's a lot of satisfaction in working with a team that cares.”

Bartovich has stepped into yet another leadership role.

In January, Bartovich became president of the Iron Mining Association of Minnesota (IMA) board.

It's the first time a woman has chaired the IMA board.

Which is not a big deal to Bartovich.

“It usually happens every year,” Bartovich said of the IMA presidents' seat. “It rotates by producer member and it was U.S. Steel's turn.”

“She's got a history and understanding of the region because she's from here,” Johnson said. “She's been in the profession for more than 20 years and has been working in and around the industry as long or longer than some other people on our board.”

Within the IMA, Bartovich helps set the agenda for quarterly meetings, ensures the organization is on a path that meets the needs of its membership, and that the IMA brings value to every member.

Bartovich's environmental expertise in Minnesota and in other states' environmental policies, brings huge value to the IMA, Johnson said.

“She's got an understanding from having grown up here and she's invested in the long-term well being of these facilities because she cares,” Johnson said.

But what's ahead in mining industry issues, can be difficult for anyone to predict, Bartovich said.

“It's a little bit of a crystal ball,” Bartovich said of 2021. “You never know what's going to come up during the legislative session, so you need really good communication between the board and members so everyone knows what's going on. In general, we just want to make sure that the membership is happy with what we're doing and included. A clear direction and collaboration is what we're looking for.”

In addition to Minntac and Keetac, Bartovich handles environmental work at U.S. Steel tubular facilities, at its new electric arc furnace facility in Fairfield, Ala., and is doing some work for the company's newest acquisition, Big River Steel in Osceloa, Ark.

“I work on a lot of policy type issues, new rules, legislative, and communicating with both internal and external groups to make everyone is informed,” Bartovich said. “There's no such thing as a typical day. Things are always changing.”

Yet, she hasn't strayed far from her upbringing.

In seventh grade, her family moved from Bigfork to Virginia.

She went on to attend Mesabi Community College.

“I could not figure out what I wanted to do,” Bartovich said. “So I figured that was financially the smart move to get my A.A. (degree) and just kind of try out different classes. I transferred to UMD (University of Minnesota Duluth) and I still wasn't quite sure. I am always amazed at those people who even as a young kid know what they want to do with their life and just plow ahead. I was not one of those. I changed my major and my schedule like 12 or 13 times that summer before I started at UMD.”

The degree, she said, didn't really align with mining.

And working at an iron ore facility wasn't in her immediate plans.

Over the next three years, she worked on her masters of environmental health and safety degree at UMD while also working at Minntac. U.S. Steel paid for her masters education under a continuing education program.

“I'd sit in class and my classmates were eating peanut butter sandwiches every day and complaining about their school loans and I was sitting pretty with them (U.S. Steel) paying for my schooling,” Bartovich said. “That was huge.”

At Minntac, she started in the industrial hygiene department, monitoring dust and noise standards.

The health and safety department was later combined with environmental.

“Once I saw what it is and what it did and how important the work was, I really got interested in it,” Bartovich said. “Frankly, that's one of the reasons why I'm a huge advocate for the new Rock Ridge (school district) academy approach. I think it's really important for people to be able to be exposed to different types of jobs and different industries and get a good idea what you have a good feel for and what you don't.”

Just as in any occupation, the chance to accept new challenges leads to personal growth, she said.

“There's always opportunities in any job to add responsibilities,” Bartovich said. “If you're willing to take on more work and look as it as an opportunity, you can be the master of your own destiny kind of.”

If leading environmental policy for U.S. Steel facilities across the nation isn't enough, Bartovich is also active in the community.

Bartovich is on the Laurentian Chamber of Commerce board of directors, chairs the IMA environmental committee, and is a board member and scheduler for the Virginia Amateur Hockey Association. She and husband Tom have a daughter who plays basketball and son and daughter twins that play hockey.

“I spend a lot of time in hockey and hockey-related issues,” Bartovich said. “This weekend (in early February) our daughter had a tournament in Cloquet and our son played in Virginia, so we were back and forth all weekend. We had five games. No, I think I forgot one. We had six.”

After 21 years with U.S. Steel, what started out as an internship has turned into a passion for Bartovich.

It's the same passion that other Minntac and Keetac workers have in their jobs and the iron ore pellets they produce, she said.

“I tried it out, never thinking too much that I'd stay,” Bartovich said. “I love the people. I really like the people I work with. It's a good company and it's exciting to work somewhere where they make something.”