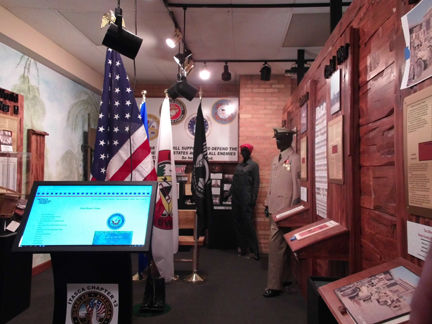 The Itasca Veterans Project exhibit at ICHS is now open and features a special kiosk for visitors to find information on Itasca County veterans service histories and stories. I 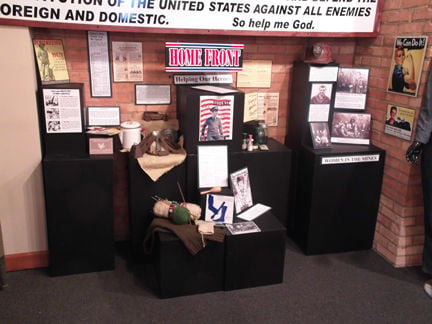 A collection of memorabilia from the home front.

The Itasca Veterans Project exhibit at ICHS is now open and features a special kiosk for visitors to find information on Itasca County veterans service histories and stories. I

A collection of memorabilia from the home front.

‘I would die for you’

The Itasca Veterans Project, the premier exhibit honoring Itasca County veterans and their stories of war and conflict is now open to visitors. The Itasca County Historical Society (ICHS) has incorporated this memorable display within its current museum space. The perpetual tribute to our area’s honorable veterans is open for viewing Monday through Friday 9 a.m. to 5 p.m. and Saturday 10 a.m. to 4 p.m.

The Itasca Veterans Project began more than a year ago with requests from ICHS to area veterans for their oral histories.

The intent was to collect stories in their own words for posterity - a collection that had never been compiled and a history that had never been fully researched. With that in mind ICHS embarked on an epic mission to get more detailed accounts and researchable information about area veterans to the public.

ICHS developed a questionnaire that veterans (or their family members) filled out relating to their service. They were asked to note their rank, branch of service, dates of service as well as the units and locations where they served. They could also choose to provide death information, if pertinent, and list awards or citations they received. ICHS went on to collect photos, memorabilia, and artifacts pertaining to Itasca County service personnel.

The Itasca Veterans Project exhibit begins with participation in the Civil War featuring a letter home from a young man serving in the Union Army. There is a list of Civil War veterans who are buried in Itasca County Cemeteries with names like John Rahier, Cermit Huson and Andrew Fraser. But this display is much more than writings and cemetery listings. Visitors will also see an authentic wool bunting American flag with cotton stars in the “13 star medallion” pattern that was designed for the 1876 American Centennial.

The exhibit continues with individual displays for World War I & II, Korea and Vietnam conflicts and the Cold War. A separate section reveals information about wars in the Middle East. The Desert Storm piece features the story of a mother and daughter who served at the same time. Also on display is the Desert Storm deployment ring of Glen Jones. A Grand Rapids native, Jones joined the Army and was sent to Saudi Arabia where he was fatally injured during a scud missile attack in February of 1991.

Itasca Veterans Project exhibit also has a special area regarding the home front activities during the wars. Here, there is a feature on women at home joining the workforce including their role in mining. There are actual “war bonds” to view and a segment about “knit for defense” which even has patterns for knitting wool socks and caps. There are actual ‘ration books’ and details about what was rationed during wartime including sugar, meats and butter.

The exhibit also includes a somber “table of honor” informing the public about POW/MIA veterans.

A specially designed kiosk allows visitors to see the photo gallery. People are able to look up facts and information about specific individuals and research their service history from where and when they served to reading letters sent back home. So, a person can enter the name of a grandmother or great-grandfather or high school friend who served our country, and find their legacy within the kiosk information. But that information will only be there if someone has taken the time to give that information to ICHS via an input form which volunteers then use to enter the individual data.

ICHS has found that many local veterans and their families don’t realize this is a continuing exhibit. Anyone, regardless of whether they were in the line of battle or not, who has served in any branch of the Armed Forces including the National Guard can be part of this historical display.

ICHS encourages people to contact them at 218-326-6431; by e-mail at ichs@paulbunyan.net; or by stopping by the museum located at 201 N. Pokegama Avenue in Grand Rapids.

The museum is open to the public at no charge and ICHS is happy to entertain groups by appointment.