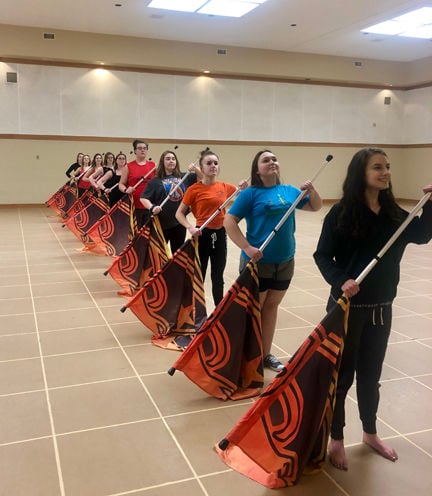 The Grand Rapids Color Guard team will be competing for the first time in a winter guard competition starting in February. 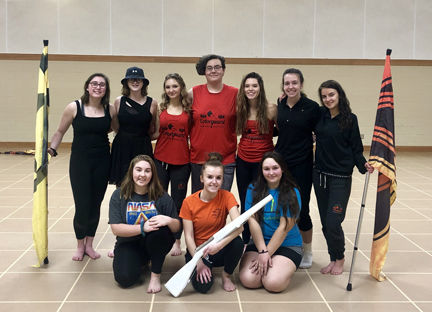 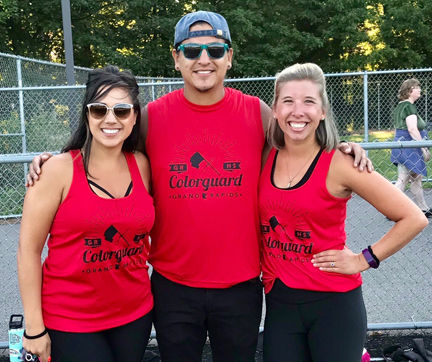 The Grand Rapids Color Guard team will be competing for the first time in a winter guard competition starting in February.

Grand Rapids High School (GRHS) boasts a large variety of activities available to students. This winter, one such activity is extending its season. The Grand Rapids Color Guard team will be competing this February and March for the first time in a winter guard competition. Athletes and coaches of this local team are already hard at work preparing for their events.

“We felt that having a winter guard in Grand Rapids was very important and long overdue for multiple reasons. For years, GRHS has dominated in the marching band world across the state of Minnesota. We feel that the color guard has been an integral part of that success and we wanted the chance to shine and thrive on our own,” said Grand Rapids Color Guard Coach Paola Lopez-Cortes. “Truly, the main deciding factor to create a winter guard program came solely from the students' passion and desire for this sport. In addition, as coaches, we felt that having a winter guard would only benefit our program in the long run.”

Color guard teams are made up of individuals who perform with a marching band and spin flags and fake rifles.

“We provide the majority of the visual effect and help portray the story being told with show-stopper costumes, colorful flags and captivating, in-sync choreography,” explained Lopez-Cortes. “Equipment and dance choreography is strategically written to compliment and highlight the marching band's music.”

Winter guard is slightly different as the color guard team performs solo to an audio recording, rather than with a live marching band. Additionally, competitions are held indoors instead of outside. Grand Rapids High School competes every year in the fall as a marching band that includes the band, drumline, pit and color guard. This is the school’s first year competing as a winter color guard.

It should be noted that Grand Rapids High School has the only competitive color guard and winter guard team north of St. Cloud. Lopez-Cortes mentioned that many of the schools their team competes against are much larger and have a significantly bigger budget for their teams.

“It is an extreme honor for us because we're often seen as a ‘little’ school from farm country and more often than not, we're the ones taking home the trophies against the bigger schools in the metro area in the fall,” Lopez-Cortes said. “We can only hope that we do the same during our winter guard season!”

The Grand Rapids Winter Guard team has 10 students who are all existing color guard members from grade 9-11. Three coaches lead the team—Randy Knight, Jane McCartney and Paola Lopez-Cortes. All three of the coaches work with the team in the fall and winter.

Coming from Oklahoma, Knight has coached and choreographed for many color guards over the last decade in Oklahoma. He joined the Grand Rapids team in 2013 and currently works for the local Community Action Team to improve the life of students.

“His skill level, knowledge and leadership have proven to be a few of the reasons for the color guard's steady and continuous success,” Lopez-Cortes remarked.

McCartney is a GRHS Color Guard alumni of 2009 and works as a school psychologist for ISD 318. She began coaching the color guard team in 2014.

“Her easy-going and positive approach to any situation is not only refreshing but has become a valuable asset to our color guard and coaching team, said Lopez-Cortes. “Often times, we find ourselves in high-pressure situations and her presence is never short of welcome and comforting to both the staff and students.”

Serving on the City of Grand Rapids Human Rights Commission and working as a legal assistant at a local law firm, Lopez-Cortes is a GRHS Color Guard alumni from 2003. She was born in Mexico City, Mexico, was raised in Grand Rapids, and has been coaching the team since 2014.

“Color guard has been a passion of mine since I can remember. I am really looking forward to watching this sport grow and evolve at our school,” Lopez-Cortes stated. “It is a dream come true to coach the same color guard that I once was a part of. I only hope that as coaches, we have the same level of positive impact on our students as our coaches in high school did on all of us.”

The winter guard team holds rehearsals twice a week for three hours each after school. Additionally, the team holds day-long practices on the weekends if necessary. Students also spend time outside of official practices to work on their own while the coaches use their spare time to organize, research, budget, schedule and much more.

“In reality, it is almost impossible to measure the amount of time and effort that students and coaches put in every week because so much of what we do is done outside of rehearsal hours,” Lopez-Cortes said. She continued, “Since this is our first year as a winter guard, there was no template of how this is supposed to be done. Randy is the only one with Winter Guard experience but Jane and I felt strongly that with his help, we could make this happen for the students and we did!”

Making this dream a reality was not an easy road. Lopez-Cortes explained that this year’s program is almost entirely funded by the students on the team.

“We also couldn't have done it without the support of our incredible GRHS band directors, Dale Gunderson and Sander Grotjohn,” said Lopez-Cortes.

Simply finding a place to rehearse was another challenge for the winter guard. Due to limited availability in the GRHS gym, looking for another affordable space was quite difficult. The winter guard team outsourced their rehearsals to spaces in throughout the area including Bovey and Cohasset.

“We would like to extend a special thank you to Mack and Vicki from Mt. Olive Lutheran Church in Bovey, Minn. for their generosity in allowing us to rehearse in their gym and making the process super easy for us,” Lopez-Cortes stated. “Also, a huge thank you to Dave O'Fallon for his contribution and kindness in allowing our kids to rehearse at the Cohasset Community Center. Without these two rehearsal spaces, winter guard wouldn't have been possible this year!”

The theme of the Grand Rapids Winter Guard’s performance is “Unwritten.” The team will compete at the following competitions:

Feb. 8 at 6 p.m. at Rosemount High School in Rosemount, Minn.

The team will also perform for the first at the GRHS Homecoming pep fest Friday, Feb. 7. Plans for a home performance are in the works and will serve as an opportunity for the community to see what the team does and as a fundraiser.

“It is our intention to hold this performance/fundraiser in late March to early April,” Lopez-Cortes said. “However, it's hard to lock a date down because gym space availability will depend heavily on if GRHS makes basketball playoffs and on tournament schedules.”

The color guard program is still in need of donations to cover the cost of transportation to competitions. Donations can be made out to the GRHS Band Boosters with the memo, “Winter Guard.”